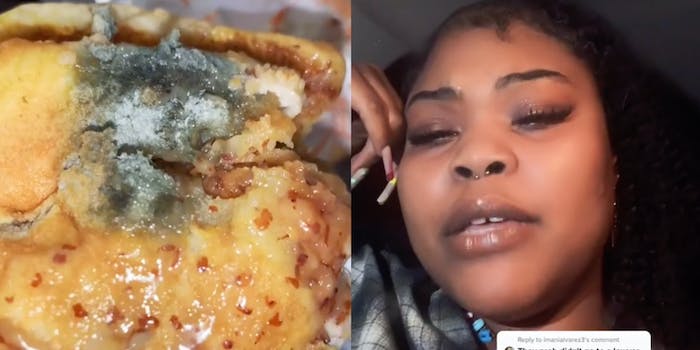 ‘This is what y’all serving the people?’: Popeyes serves customer moldy chicken sandwich in viral TikTok

In a now-viral TikTok, a Popeyes customer said her friend was given a sandwich with mold on it—resulting in her getting sick.

In a series of videos posted in September, user @heardyouuuu is seen with friends waiting in line at a Popeyes drive-thru. The women in the car are heard joking with one of the employees at the store, but claim in the caption that he later “threw cold fries” at them.

In a follow-up video, which now has over 307,000 views, @heardyouuuu said things “got worse” when she realized her friend was given a moldy chicken sandwich. But since her friend was eating the sandwich in the dark, she didn’t notice the mold until she was nearly halfway done.

“This is what y’all serving the people?” @heardyouuuu said.

In a final video, @heardyouuuu confirmed that her friend later got sick after eating the sandwich—something commenters warned might happen. @heardyouuuu said she called Popeyes’ corporate office to tell them what happened, but never heard back from them. She then called the store that gave her the spoiled sandwich, but the manager only offered to replace all the food the group purchased.

“Why would we want food replaced that y’all obviously saw was contaminated the first time y’all served it to us?” she said.

She closed the story by saying that there’s no “big update” since her issue was never formally resolved. But in the comments, users encouraged her to file a lawsuit against the restaurant.

“Girl, have your friend call a lawyer, don’t let it slide,” someone wrote. “They need a health inspector to get involved so others don’t get sick.”

“U definitely have a case,” said a second person.

The Daily Dot has reached out to Popeyes and @heardyouuuu for comment.