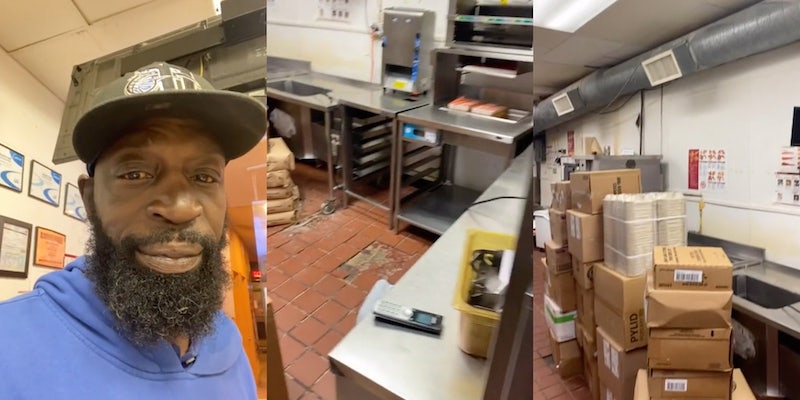 Some viewers were appalled. Others made 'Ratatouille' jokes.

A viral Reddit post shows video footage of several rats running around a Popeyes kitchen in the Washington, D.C. area.

The video, shared by user u/PositivityCentral in the subreddit r/PublicFreakout, received almost 10,000 points as of Sunday. The caption read, “Popeye’s Plague Rats vs. The Most Honest Man In Food Delivery.”

The man in the video, who originally posted the video to TikTok on Oct. 11, said he delivers chicken to all the Popeyes restaurants in the D.C. area. While he was delivering chicken, he found a rat infestation in one of the stores.

While recording, the man walked to the back of the restaurant, saying, “Y’all ready? This is Popeyes.”

Then he flipped on the kitchen light, sending several rats scurrying across the kitchen to hide.

“You still love that chicken from Popeyes?” the man asked, referencing the restaurant chain’s jingle. The Louisiana-based restaurant is known for its fried chicken.

The man estimated there were at least 15 rats in the kitchen.

Reddit viewers found the situation gross but funny, cracking jokes in the comments.

“Thats my boy Remy… they just use it as a test kitchen when the humans are gone. Please don’t fire Linguine, its not his fault,” another viewer wrote, referencing Disney’s Ratatouille.

Another Redditor chimed in on the Ratatouille joke, saying, “Remmy is just trying his best jeez guys give them some slack!”

With a more serious tone, other viewers claimed that probably many restaurants operate in the same unsanitary conditions until they’re caught.

“I feel like if a clean sweep of every single fast food restaurant in the country, right now, happened, a bunch of them would be closed,” one person said.

A different viewer commented, “This is how the future gonna be bro, business’ illegal shit will go on for as long as it can until someone films it and airs it out online. Then it’s suddenly reprimands and firings, lmao.”

Several viewers said the man in the video should get a medal or a raise for exposing the infestation, while others said it was more likely that he got fired.

FOX5 reported that the Popeyes in the video, located near Eastern Market in Washington, D.C., was shut down for health code violations on Thursday after the TikTok went viral.

Popeyes and the original poster did not immediately respond to the Daily Dot’s request for comment.