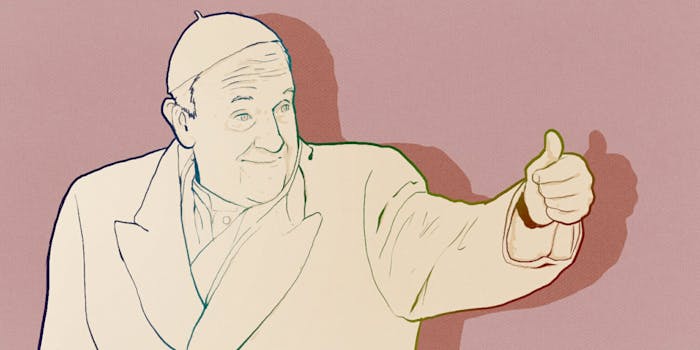 Pope Francis disappointed the hip-hop community when he dropped a prog album instead of the rap record he was born to make. But then #PopeBars started trending this week.

Armed with the perfectly positioned meme, the Internet decided to write bars for the pope creating the funniest and holiest raps in history. In line with the adage, “immature poets imitate, mature poets steal,” Twitter users picked lines from their favorite rap songs and blessed them with holy water.

Here is a list of the best #PopeBars tweets and the musical geniuses that influenced them:

Bow down for @FeministaJones’ exquisite use of Notorious B.I.G’s “Big Poppa.”

"I love it when they call me Big Papa
Form ya hands and say prayers
Like you don't even care"#PopeBars pic.twitter.com/G0EAIBlrH3

It was all a dream
I used to read Luke 4:17
Virgin Mary and Moses
looking over my papal mezzanine#PopeBars pic.twitter.com/YmNStFkA8N

@AndrewBloch understands that opportunity comes once in a lifetime by capitalizing on the only moment he’ll get Eminem and the pope to agree on Slim Shady’s hit “Lose Yourself.”

@DamonStCloud throws back to the late Tupac’s banger “Hit Em Up.”

First off , Thank the Lord and the Christ we claim..Baptized when we ride come equipped with game. #PopeBars pic.twitter.com/o6Q00pHo3y

Clearly @peraisakop had a moment of brilliance when he decided to steal from Jay Z’s “Moment of Clarity.”

"Whatcha gonna box me hommie, I can dodge your jab
Three shots couldnt touch me, thank god for that" #PopeBars pic.twitter.com/VsV6o74FT6

And @TheCatWhisprer drop bars for all the Black Album fans with a reimagined “99 Problems.”

If you got God problems I feel bad for you son / I got 99 problems but God ain't one#PopeBars pic.twitter.com/BIuTR3oLwR

Much respect goes to @JamesLedwaba_ for shouting out Drake’s breakout diss record “Back To Back.”

Is that a World Tour or The Lord's tour? #PopeBars pic.twitter.com/oGzMccADOt

And of course who could forget Drizzy’s “Forever.”

Stay tuned for the pope’s mixtape folks. If #PopeBars is any indication, it’s going to be #lit.