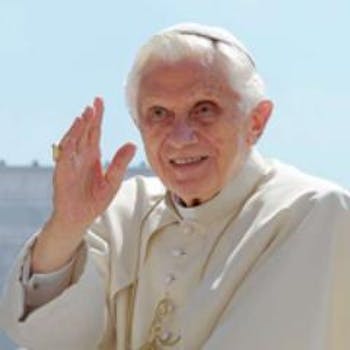 Pope admits social media is the future of evangelism

In an address last week, the Pope spoke of plans to use the Internet to invite people to "an encounter with the mystery of God's love."

The Pope has called for Twitter users to spread the word of Catholicism.

The pontiff used his World Communications Day 2013 message to ask devotees to think about how the likes of Twitter and Instagram can be used to urge others to join the faith.

“The challenge facing social networks is how to be truly inclusive: thus they will benefit from the full participation of believers who desire to share the message of Jesus and the values of human dignity which his teaching promotes,” said Pope Benedict XVI. “Believers are increasingly aware that, unless the Good News is made known also in the digital world, it may be absent in the experience of many people for whom this existential space is important.”

The Pope noted that the “digital environment” is part of the fabric of daily life for many people, particularly younger members of society. That makes it an important way for the Vatican to get the message out about Catholicism.

He also noted the multimedia aspect of communities like Twitter, and pointed out the importance of using religious iconography in spreading the word: “In the digital environment the written word is often accompanied by images and sounds,” he said. “Effective communication, as in the parables of Jesus, must involve the imagination and the affectivity of those we wish to invite to an encounter with the mystery of God’s love.”

While the Pope appreciates the power of the Web and its capacity to share and promote ideas, he does have a problem with pervasive celebrity culture.

“Popularity, for its part, is often linked to celebrity or to strategies of persuasion rather than to the logic of argumentation,” he pointed out. “At times the gentle voice of reason can be overwhelmed by the din of excessive information and it fails to attract attention which is given instead to those who express themselves in a more persuasive manner.”

The pontiff joined Twitter in December, and sent his first tweets later that month. He’s somewhat a of a celebrity himself, with more than 1.4 million followers on his English-language Twitter account alone.