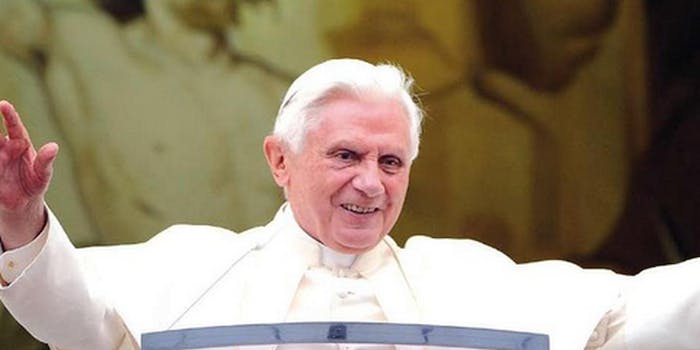 Pope Benedict plans to shut down operations on @Pontifex, the most dynamic and explosive Twitter account the papacy has ever seen.

The big news out of Vatican City this week is not that Pope Benedict has arranged for the most reputable set of Catholic movers to handle the transfer of his leather couch back to civilian land when he leaves office next Thursday, Feb. 28.

It’s that the man plans to shut down operations on @Pontifex, the most dynamic and explosive Twitter account that the papacy has ever seen.

Pope Benedict XVI’s @Pontifex opened to a firestorm of attention and adoration Dec. 3, when the Vatican confirmed to the highly anticipating world that the Pope was getting ready to start tweeting messages of love and life and all that other stuff—scheduling changes, maybe, who knows.

He delivered his first tweet nine days later, writing, “Dear friends, I am pleased to get in touch with you through Twitter. Thank you for your generous response. I bless all of you from my heart.”

Which is really altogether not that much different from the kind of junk Rob Delaney tweets every day.

The Pope actually tweeted eight different times that premiere day, a quick jump out of the gate that was followed up by severe tweet fatigue. Through two months—and Christmas, a pretty important day in the Catholic calendar!—those eight tweets amounted to nearly 25 percent of the Pope Benedict’s total tally.

Big Benedict did manage to reel in more than 1.5 million followers during that time, however, following nobody but himself despite the fact that he loves all his people.

In honor of the Pope’s pending resignation from Twitterhood, we decided to round up our favorites from the 36 tiny tutorials he’s tweeted out. Lo and behold, you could say it was god’s work.

Nigeria thanks you, Pope.

Syria thanks you, Pope.

The unborn thank you, Pope.

Sunday for us? Pope, the Dolphins play the Cowboys at 3pm.

We turn to you for the answers to these questions, Pope.