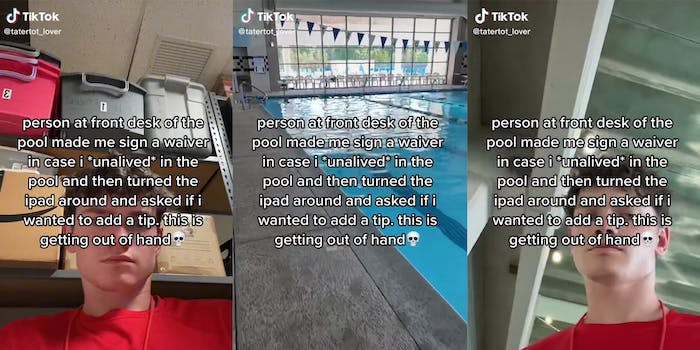 'Tipping culture is getting out of control.'

Tipping culture is a popular discussion topic on TikTok. Usually, the videos that spark this discussion have to do with tipping for services many believe customers should not tip for, like self-serve frozen yogurt shops.

A TikToker, Jake (@tatertot_lover), seemed to mock tipping culture and the conversation surrounding it in a video that went viral but has since been deleted. Jake claimed in the TikTok that he was asked to tip after signing a liability waiver at his local swimming pool.

“Person at the front desk of the pool made me sign a waiver in case I *unalived* in the pool and then turned the iPad around and asked if I wanted to add a tip,” text overlay on the video reads. “Tipping culture is getting out of control.”

Jake is wearing a “fitness and wellness” shirt and is seemingly at a gym pool in the video, indicating Jake might be a worker at the gym.

While the video is likely a joke, many commenters took it at face value.

“I agree only hard labor and food industry should really take tips,” one commenter wrote.

“You did more work than them you deserve a tip from them,” another said.

“Are you ‘unalive’ serious?” another questioned, taking aim at the “waiver” specifically. “Absolutely stupid requirements to swim.”

Others pointed out the video is a joke.

“I’ve already seen this exact video this is copied word for word,” another alleged.

The Daily Dot has reached out to Jake via TikTok comment.