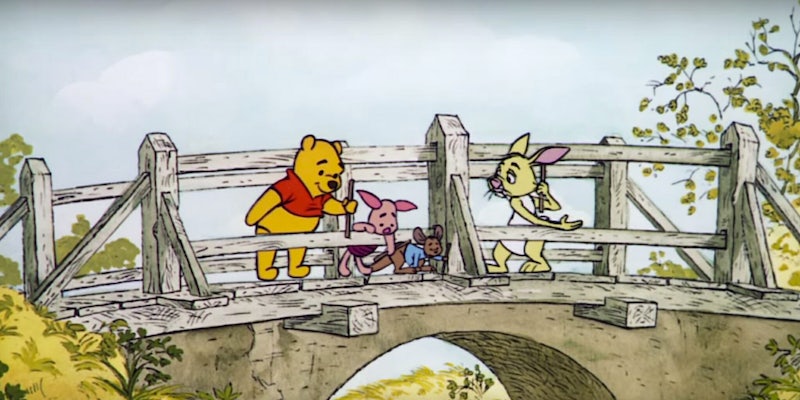 The government agency responsible for culture, sports, tourism, and parts of the media took heat from the Internet after tweeting and promptly deleting safety precautions for a game made popular by Winnie the Pooh.

The rules of Poohsticks, as Rabbit explains to Pooh, Piglet, and Roo, are fairly simple: Everyone leans over the bridge to drop their sticks into the water, and the person whose stick reaches the other side of the bridge first wins

Poohsticks is now in the news because the Royal Academy of Engineering’s Dr. Rhys Morgan recently came up with the perfect formula for playing it, leading some of the U.K.’s official social-media accounts to get on board.

The tourism agency Visit England offered some suggestions for where people could play Poohsticks. That sounds innocent enough. But the Department for Culture, Media, and Sports (DCMS) took things further.

At first, it just wanted to crowdsource playing locations from its followers.

But instead of retweeting those suggestions, the DCMS tweeted out some safety precautions for anyone partaking in Poohsticks.

This led other Twitter users to tweet out their own inane rules and safety tips for playing the game. Things quickly got out of hand.

When playing #Poohsticks, be sure to bring a structural engineer with you at ALL times https://t.co/8NX7kUYBxw

Get that child away from the railings!!!!!
Haven't you heard of Health & Safety for pity's sake?#PoohSticks pic.twitter.com/ZaEA6VKwLO

Also while playing #Poohsticks children shouldn't be left alone with a yellow bear, a piglet or a donkey with a pink bow.

The DCMS quickly deleted the tweets and apologized for what the department called a “silly mistake.”

Silly mistake on our part on the #PoohSticks tweet – we didn't mean for it to be posted. Apologies all.

While DCMS may have deleted the tweets to put a stop to any of the backlash, the deletions prompted a second wave of criticism.

Without safety tips for playing Poohsticks, Twitter users had plenty of mocking questions about the game and what to do if something went wrong. They sounded the alarm about the many disasters occurring in the absence of the DCMS’ safety advice.

The @DCMS has deleted its #poohsticks tweet and I'm sorry to say 453 twig-wielding youngsters have already fallen from the Severn Bridge.

We eagerly await the DCMS tweets about how to handle the impending invasion of Heffalumps and Woozles.