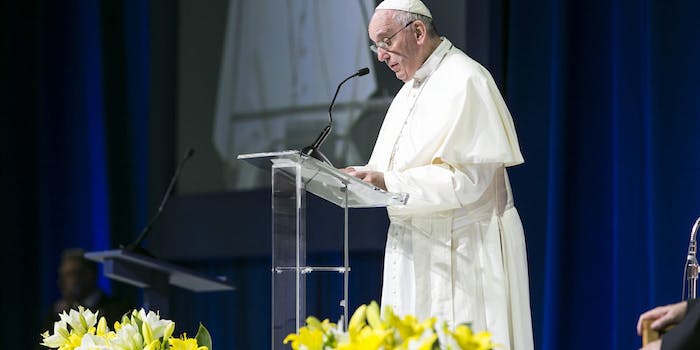 What if His Holiness became His Thirstiness?

“The Feast of the Sacred Heart reminds us that God loved us first: He is always waiting for us, welcoming us into His Heart And Asshole.”

Pontifux has since taken on a life of its own by combining tweets from such accounts as Rule34.txt and masturbate.log. Here’s a few to get you started.

Some of Pontifux’s tweets get pretty kinky.

And just flat out gross.

As it is written in the Gospel, Jesus came.

It didn’t take long for Twitter to join in on the fun as Pontifux’s tweets have blown up across the site.

His Holiness’ thirstiness is proving too much for some Twitter users to handle.

We're going to Hell for this one

While Pontifux is a more recent phenomenon, Twitter mashups aren’t anything particularly new. Pontifux’s formula is pretty simple too, and users can create their own porn-inspired tweets by simply combining any account with a lewd .txt feed. Here’s how our Twitter feed stacks up through the site.

Chilling. Maybe it’s time for us to switch focus.