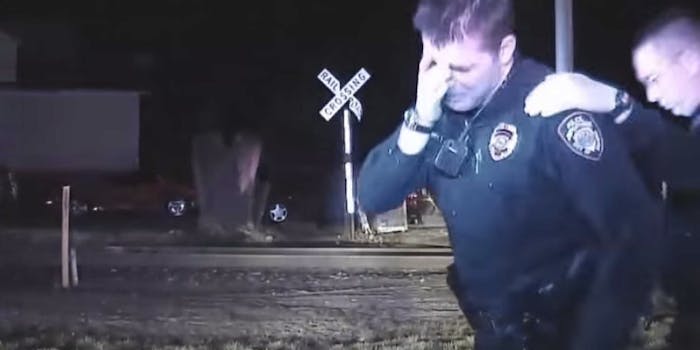 The footage didn't prevent him from being cleared of wrongdoing.

Police violence caught on camera is nothing new, but rarely do we have access to the moments that follow the use of deadly force by those sworn to serve and protect. In the harrowing video below, Billings, Mont., police officer Grant Morrison appears to be in a state of shock after fatally shooting unarmed suspect Richard Ramirez during a traffic stop in April.

The raw footage comes from the patrol car of officer Brad Ross, who walks a tearful Morrison away from the scene of his encounter around the 1:45 mark and tries to calm him down.

“I thought he was gonna pull a gun on me,” says Morrison.

“Maybe he was, maybe he was,” Ross says as Morrison breaks down into sobs. “Jesus, Grant. You survived.”

Ramirez, high on methamphetamine at the time of his death, allegedly disobeyed Morrison’s orders for him and the vehicle’s passengers to raise their hands—and instead reached for his waistband.

“I knew in that moment, which later was determined to be untrue, but I knew in that moment that he was reaching for a gun,” Morrison told a jury that cleared him of any wrongdoing on Wednesday. “I couldn’t take that risk. … I wanted to see my son grow up.”

Billings Police Chief Rich St. John had confirmed that Morrison was the same officer who in February 2013 killed drug suspect Jason James Shaw under eerily similar circumstances. The jury for a coroner’s inquest ruled that this shooting, recorded by dash cam, was justified.

After a period of paid administrative leave, Morrison is now back on active duty.