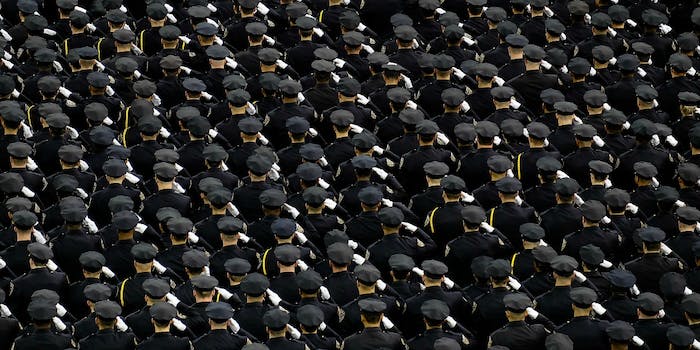 'I never expected cops to be that cool.'

In the wake of a white South Carolina police officer choking and yanking a student out of her chair at school, getting himself fired while horrifying much of the nation, another white cop had an encounter with a black female student this week.

Instead of getting violent, this officer got funky.

According to the Washington Post, the scene started with Washington, D.C., police breaking up a pair of fights between students. Then a female officer approached the students and asked them to disperse.

“Instead of us fighting, she tried to turn it around and make it something fun,” Taylor told the Post. “I never expected cops to be that cool. There are some good cops … I thought all cops were cruel because that’s how I saw them. I’ve now seen there are good cops out there.”

And though it’s not necessarily clear who won the dance-off, everybody peacefully left the area soon after. The officer, who recently returned from a tour of duty in Iraq, spoke to the Post but didn’t want to be identified.

“It’s kind of embarrassing that this became so big,” she said. “This is what we do every day.”

The encounter also caught the eye of a certain D.C. resident.

Who knew community policing could involve the Nae Nae? Great example of police having fun while keeping us safe: https://t.co/ZGeTDm6OYw