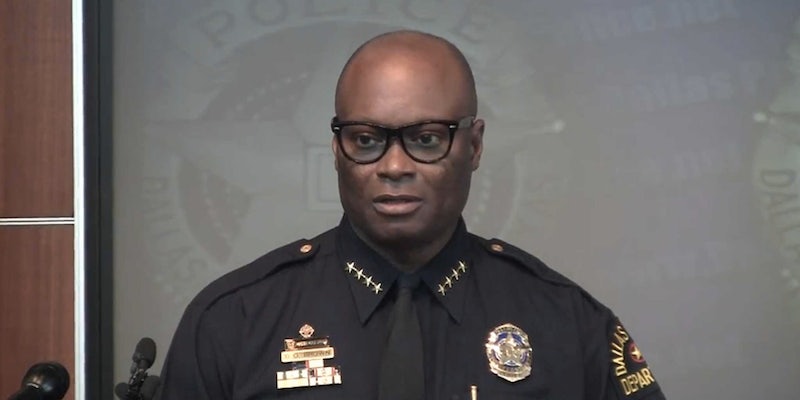 This guy's got no time for subtweets.

Unlike most of the bosses you’ve probably had in the past, Dallas police chief David O. Brown doesn’t discipline his employees by snubbing them, or lobbing passive-aggressive criticism at them, or presenting them with a subpar gift at the office holiday party. Instead, he fires their asses and tells the world about it on social media (yeah, I bet those differently-sized mittens your boss gave you for Hanukkah are looking a lot better right now).

According to Vocativ, the Dallas police chief terminated or disciplined 27 employees in 2013 alone, all of which were broadcasted on the chief’s Twitter account. The tweets, while brief, are fairly comprehensive, including the terminated party’s name, position, and the nature of the offence that got him/her fired:

I have demoted SC Reynolds for failing to aid a fellow officer who was nearby requesting help with a combative prisoner.

I have terminated SC Amy Wilburn today for firing her weapon upon an unarmed person without fear or justification.

Under Civil Service rules, SC Wilburn has the right to appeal her discipline.

I have terminated Sgt. Rafael Rodriguez for his involvement in a domestic disturbance which resulted in a police response.

I have terminated SC Frank Della for public intoxication, damaging a person’s property, and making offensive contact with a person.

I have terminated 911 Call Taker Moises Limon today for driving while under the influence and not reporting his arrest to his supervisor.

Chief Brown also posts about the firings on the Dallas Police Department’s Facebook page, including more detailed accounts of the offenses that led to the officers’ termination (the senior corporal arrested for public intoxication, for instance, was arrested for getting drunk at a concert and throwing a barricade at a car— and then threatening to strike the owners of the car when they complained).

To be fair, the grounds for termination listed on the DPD’s Twitter and Facebook accounts aren’t of the standard, petty “he drank all the coffee every morning/she got too drunk at the office parties” variety: the offenses listed are pretty egregious, to the point where these employees could probably benefit from a little public Twitter shaming (it also kinda makes you wonder what kind of hiring standards the DPD has these days: DWI on the job? Throwing a barricade at people? Where are you guys doing your recruiting, at a Carl’s Jr. parking lot?).

It’s also pretty obvious from looking at Chief Brown’s Twitter that he’s not a petty, vindictive tyrant, but a man intensely devoted to his job: he often publicly commends members of his force who’ve done good work, and he appears to be extremely active in the Dallas community. In a tweet to Vocativ, he said that tweeting about disciplinary action against DPD members did not stem from vindictiveness, or a desire to embarrass the parties involved, but from a need to encourage transparency and “engage the public on social media,” and there’s no reason to believe this isn’t the case.

Still, there are some obvious privacy issues raised by Chief Brown’s social media policy: as Vocativ points out, the terminated employees’ names are reprinted in full, and there’s no “allegedly” qualifier preceding the description of the offense. And although the DPD says they’re not aware of another police force using similar social media tactics, it’s not hard to imagine it setting a dangerous precedent for other supervisors, even those outside the field of law enforcement. And their reasons for Twitter-shaming employees may be far less pragmatic than Brown’s.