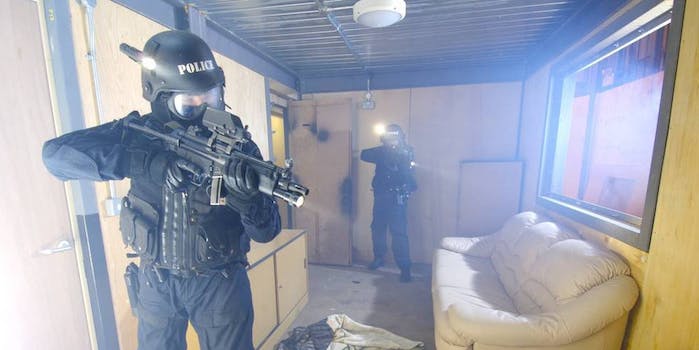 Want to protect yourself from police abuse? Buy a dashcam

It's a little purchase that could go a long way.

Police dashcams—vehicle-mounted cameras pointing out from a patrol car’s windshield—have long been great fodder for basic cable offerings such as World’s Wildest Police Videos and World’s Scariest Police Chases, showing the sort of comical or thrilling scenes of law enforcement more common in movies or Reno 911. More recently, though, dashcams have become a commonplace necessity for any motorist in Russia or Asia, capturing footage comical, tragic, and downright awe-inspiring.

However, these devices are mostly meant for a very legitimate legal purpose, namely protecting the person behind the wheel from fraud and abuse. In the world of law enforcement, dashcams have played an integral role in police activity since their widespread adoption in the 1990s, usually as evidence in roadside stops or use-of-force claims. In its last review of the program from 2007, the Justice Department found that 61 percent of police departments use the cameras.

But as the #BlackLivesMatter movement fighting for justice for those gunned down by police officers moves past its six-month mark, the question remains whether police officers can be trusted to keep the equipment on when the officer, not the civilian, is acting questionably.

This week, 18-year-old St. Louis resident Cortez Bufford filed suit against the St. Louis Police Department after police forcefully removed Bufford from his vehicle as a suspect in a shooting before repeatedly kicking and Tasering him. Amid the filmed scuffle—which did turn up a 9mm pistol on Bufford’s person—one officer stops the others by calling out, “We’re red right now so if y’all are worried about cameras just wait.” The seven officers present stop kicking Bufford and wait for another officer to turn off the dashcam.

It’s the worst nightmare for those concerned about police being in charge of their own surveillance. Despite most police officers respecting the work dashcams can do for their own credibility, this video presents the worrisome possibility of officers deciding when and when not to use the cameras for their own benefit. As police departments across the country begin to institute body cameras, it’s now clear a dashcam might be a worthwhile purchase for every civilian.

In fact, perhaps automakers will make that decision for us. The 2015 Corvette Stingray comes with a built-in dashcam as part of its Performance Data Recorder, yet another move by carmakers to basically build smartphones on wheels. While there are certainly privacy concerns to be had, it’s easy to see front-facing dashcams become as swiftly adopted as an industry standard as rear-facing reverse assistance cameras have become.

Despite their popularity in other parts of the world, however, consumer dashcams have failed to gain a major following in the U.S. In Russia, where the devices seem to be most popular, dashcams serve the purpose of protecting drivers from a plague of insurance fraudsters and corrupt police. Russia is also a very dangerous place to drive, with double the rate of traffic fatalities than the U.S. As activist Aleksei Dozorov told Radio Free Europe, “You can get into your car without your pants on, but never get into your car without a dashcam.”

While we might rightfully stop short of comparing American police forces to Russian authorities, civilian-owned cameras can be powerful tools in the issues American civilians do face in dealing with cops. In every police abuse case since an eyewitness filmed the beating of Rodney King back in 1991, it’s been clear filming as many angles as possible can help catch wrongdoing when it comes between the word of authorities and the word of those victimized.

As has often been pointed out since the incident, the lack of dashcam footage in the altercation that took Michael Brown’s life last August largely caused the confusion of circumstances the grand jury was presented with before deciding not to indict Darren Wilson. Despite six eyewitnesses, the official record of what happened the night Brown was shot remains rather unclear, relying as it does on the testimony of one man.

Despite the six eyewitness testimonies to the contrary, the jury decided to not even bring Wilson to trial—though grand juries are typically pro-cop in cases like Brown’s. With the footage of a dashcam, the fight for justice for Brown might look a bit more like the fight for Jerame Reid of Bridgeton, N.J. The 36-year-old was pulled over when dashcam footage shows the officer erratically yelling at Reid and his passenger, shooting Reid dead even as he had the video clearly shows him with his hands up.

The reason Ferguson, Mo., lacked the dashcams that clearly showed Reid’s wrongful death is, reportedly, because the police department finds them too expensive. Thomas Jackson, chief of police in Ferguson, claimed dashcams cost $3,000 to purchase and install per unit. While that’s a dubious claim at best—the most popular models are in the $200 range—perhaps it’s a cost consumers should take upon themselves.

Whether it’s smartphones, body cameras, or dashcams, numerous studies have revealed precisely how much these devices can protect not just motorists but officers as well. In a 2005 study from the International Association of the Chiefs of Police, researchers found a dramatic increase in officer safety and accountability in agencies that used the dashcams. Similarly, recent studies have confirmed the help body cameras can provide to law enforcement, with major departments like the LAPD adopting their usage.

As long as these technologies are helping police, the question remains whether we should trust them with a power we, too, could easily and cheaply obtain for ourselves. Not everyone will be ready for such casual sousveillance in all of its forms, and one of the reasons Google Glass was sent back to the drawing board is the average consumer isn’t comfortable with wearing a camera on their person at all times. The widespread adoption of dashcams in other nations (combined with growing concerns about police abuse) means we could soon see more mainstream usage in the States.