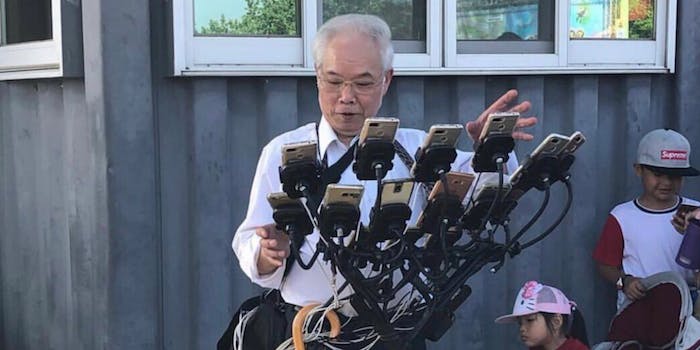 This hardcore Pokémon Go player has an incredible rig

He's gonna be the very best, like no one ever was.

We last saw the Taiwanese Pokémon fan rocking a special rig where he’d ride through town on his bike with over nine smartphones attached to it so he could play on the go. With each phone attached to a portable charger, he could play as long as he wanted, cruising past the haters and catching more Pokémon than you.

After making a splash online and going viral with his ridiculous setup, San-yuan has surfaced online again. And it looks like he doesn’t need the bike anymore.

This time, San-yuan is rocking a system mounted to his body that lets him walk around and play Pokémon Go like an old pro without the nuisance of pedaling or anything that could take him away from his hobby. This is dedication, folks.

He’s doing better than ever, spending over $1,000 a month to fuel his dream of becoming a Pokémon Go master, and his favorite Pokémon is Snorlax. We do have some questions, though, like…isn’t all that stuff heavy?

To ensure his phones are powered up at all times, he keeps a portable charger in his backpack to ensure they’re juiced up and remain on so he doesn’t miss out on a single monster. Dedication at its finest, people.

His dedication hasn’t kept him from becoming the subject of some hilarious memes, though. Social media users flocked to Twitter to come up with images of what his new getup reminds them of.

Looking to try out Pokémon Go for yourself? It’s available now on iOS and Android for free, so you can jump in without breaking the bank. Just don’t be surprised if this guy ends up beating you no matter how often you play.