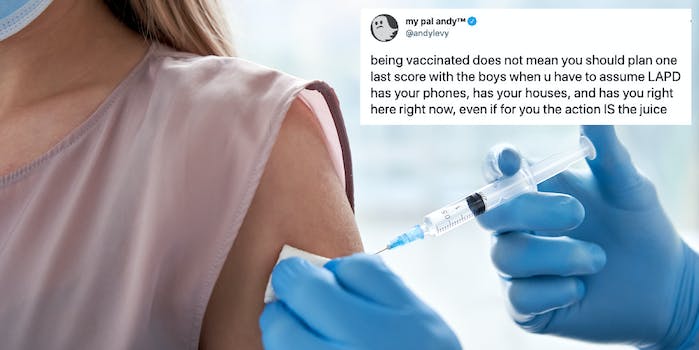 Definitely do not travel to Sweden for some shady-sounding festival.

So, you’ve got your second COVID-19 vaccination. That’s great! You can finally see your family, get your hair done, and go to the dentist. But can you have brunch with a group of friends at an indoor restaurant or travel out of the state or country? That’s where things get a bit murkier—particularly, in the judgemental eyes of society. A new meme on Twitter is taking the punch out of these judgey judgersons by posing theoretical questions of what being vaccinated does NOT mean.

Only, instead of what is or isn’t safe behavior for vaccinated people to adhere to, the meme presents vague plot descriptions from film, TV, books, or other absurd scenarios. It’s unclear how or where the “being vaccinated does NOT mean” originated, but its widespread popularity can likely be attributed to the following example that describes the plot of the 1985 film Clue.

Since being posted on April 6, within a day and a half the tweet had already accumulated nearly 25,000 likes and became the inspiration for countless others.

As you can see below, other examples riff off of popular works of media ranging from Jurassic Park, The Parent Trap, Twin Peaks: The Return, and the 1995 heist flick Heat to Les Misérables, The Masque of the Red Death, and more.

And because even two years later, people still can’t seem to get enough of Midsommar, the 2019 folk horror film inspired more than a few examples of the “being vaccinated does NOT mean” meme.

One writing instructor employed the “being vaccinated” meme for a tongue-in-cheek grammar lesson about the Oxford comma.

In all seriousness, it’s going to be a fine line balancing personal comfort with social responsibility about what being vaccinated does or does not mean. Just like, maybe put off that trip to Vegas until 2022.

This meme celebrates what the deceased would have loved or hated