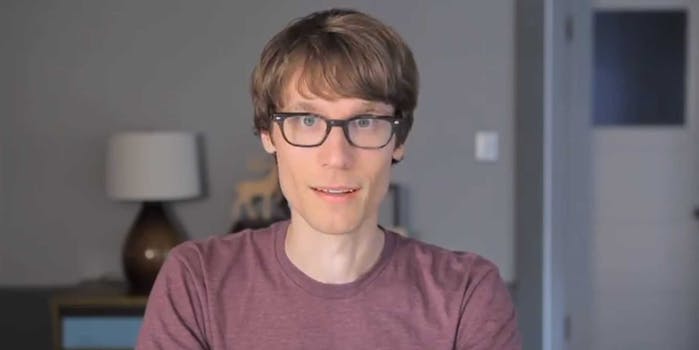 YouTuber’s ad money cut off because he was too popular

Jeff "Pleated-Jeans" Wysaski had to start a new channel after YouTube wrongly accused him of faking views.

Fans of humor site Pleated Jeans were in for a surprise on Monday when they refreshed their YouTube feed to find a new video from Pleated-Jeans himself, Jeff Wysaski, asking them to subscribe to his new channel.

But Wysaski wasn’t expanding his comedy empire—he was leaving his successful YouTube channel with more than 78,000 subscribers and starting over from scratch.

As it turned out, he didn’t have much of a choice.

“Here’s the deal,” Wysaski said. “I have to move my channel for legal reasons.”

He offered an explanation in the Discussion section of his new channel.

Wysaski places ads on his videos through AdSense, a service from Google that pays popular content creators who allow ads to appear on their pages or run as a “preroll” before a video starts. He relies on those ads for income, but his AdSense account was banned in February for “invalid activity” after one of his posts went viral on Facebook.

The problem? The post went viral too quickly, and Google thought that Wysaski manufactured those links illegally, which would break AdSense’s terms of service. Because he uses the same AdSense account for his website and his YouTube channel, Google’s ban hit both.

Naturally, he tried to appeal.

“I honestly think I could have cleared up the whole thing if I could have just talked to a real person, but Google is so big and anonymous that the only way to communicate with them is through a stock online form,” Wysaski wrote on his new channel.

He tried everything he could think of to get the ads reinstated on his account. He appealed three different times and even “drove several hours to the Google headquarters to try to talk face to face with someone”

Now, unable to make a living through his original channel, he has made the decision to migrate in order to open a new AdSense account.

“Believe me, if I didn’t NEED those ads to pay my bills, I would happily keep uploading videos for free on the old channel,” he wrote. “Unfortunately, that’s not the case. And so, I’m forced to move [to the new channel].”

YouTube star Hank Green and actor Wil Wheaton have both thrown their support behind Wysaski and called Google out for its lack of human contact when it comes to working with YouTubers. Other YouTubers have noted that this is nothing new.

“This sort of bullshit happens all the time, and there’s just no excuse for it,” Wheaton wrote on Tumblr. “Either hire more people to handle this sort of thing, or fix the code that’s flagging legit content creators and hurting their ability to make a living from their creations.”

CORRECTION: It was a post, not a video, that went viral on Facebook and triggered the ban.