The epidemic of racism in soccer continues as racist chants drive AC Milan players off the field.

Players and officials walked off the field during an exhibition soccer game in Italy after fans targeted players with racist chants.

AC Milan’s Kevin-Prince Boateng picked up the ball and kicked it into the stands in the first half of the game against lower league team Pro Patria. As he left, he applauded most sections of the stadium, and those fans reacted angrily towards the section where the chants originated.

Milan, a seven-time European champion, said on its website that its other black players, M’Baye Niang, Urby Emanuelson, and Sulley Muntari also suffered abuse. The Italian Football Federation (FIGC), meanwhile, announced an inquiry, with its president calling the incident  “unspeakable and intolerable.”

Boateng, who previously played for English teams Portsmouth and Tottenham Hotspur, made his feelings clearer on Twitter, where he retweeted messages of support from his peers: 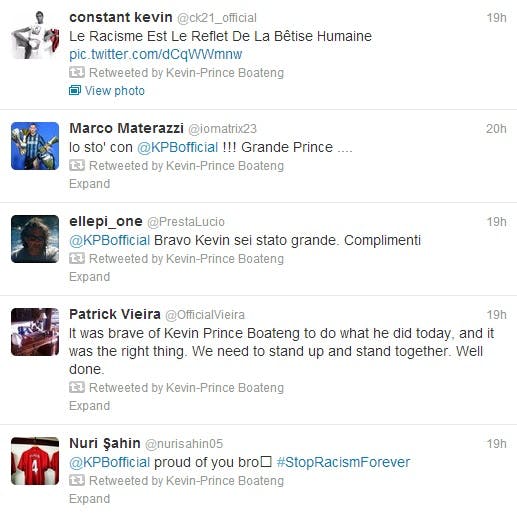 A YouTube video highlighting the incident has picked up more than 1.4 million views since Thursday.

Racism in soccer has spilled onto the Web in recent years, with the issue becoming a hotbed topic on Twitter in 2012 as both players and fans were punished for racially driven comments. Meanwhile, Chelsea’s John Obi Mikel quit the community in September over racist taunts.