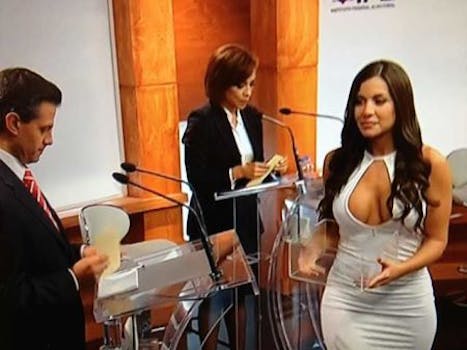 Julia Orayen, the event’s hostess, has become an overnight sensation on the Web, with a new meme and heavy traffic on YouTube.

Sometimes saying nothing at all is enough to win a political debate.

That was the case Sunday night in Mexico when a voluptuous model took the stage for about 30 seconds to hand out pieces of paper to each presidential hopeful dressed in a skin-tight gown.

“The best was the girl in white with the cleavage at the beginning,” Jorge Castaneda, former Mexican Foreign Minister, tweeted.

During the debate, Orayen served as edecan, a  “hostess who stands during meetings or parties to help guide or coordinate guests,” the Los Angeles Times reported.

Orayen chose the dress herself but was given some instructions on what to wear by the TV production team.

“I didn’t think it would reveal as much or cause this much scandal,” she told the Cadena Tres TV network. “I learned I like myself better when I’m covered up.”

Videos of Orayen’s now famous stage appearance have been uploaded to YouTube, where they have collected more than 300,000 views.

It was a similar scene on Twitter, with Orayen being mentioned more than 50,000 times in the last two days, according to statistics from Topsy.

“The winner of the debate, the aide Julia Orayen,” tweeted Sergio Sarmiento, a Mexican journalist (@SergioSarmient4). “Neither candidate had a chance to change the course of the election.”

Orayen’s curvacious figure also inspired people to tweet comics and memes making fun of the Federal Electoral Institute of Mexico, or IFE, and the model. Here’s a look at a few that caught our eye.