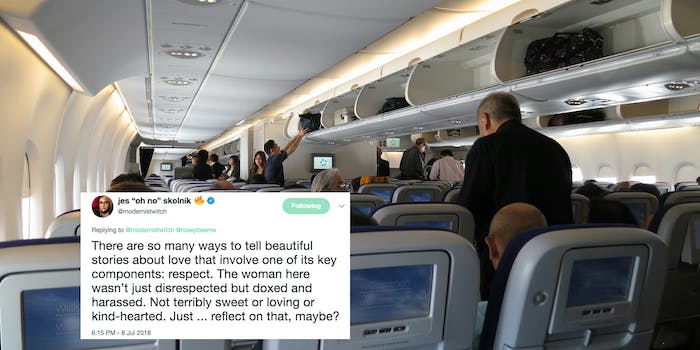 Like all things on the internet, it turned rotten.

“Plane Bae” was the airplane meet cute heard around the world last week. Unfortunately, like most things that start good on the internet, parts of the story—namely, the perverse exposure of a woman who never asked for extremely public attention in the first place—have turned rotten.

It all started when a Texas actress and photographer who goes by Rosey Blair posted a Twitter thread about witnessing an instant bond between two strangers on a plane to Dallas. The story began like this:

Just like an alluring reality TV plot line, the thread was an instant hit and gave hundreds of thousands of people a much-needed injection of sappy positivity. Blair and her boyfriend were immediately invited to appear on the news, and the male protagonist came forward to reveal himself as retired soccer player and fitness model Euan Holden. He made an appearance on NBC’s Today and added the moniker “Plane Bae” to his Twitter bio.

The woman in the story was, understandably, less eager to face the public. But Blair, obviously enjoying the attention the thread brought her and her cultivated social media brand, nevertheless encouraged the sudden “Plane Bae” fandom to seek out the woman’s identity despite not having “permish.”

“You guys are sneaky,” Blair said in a follow-up video.

Fueled by the ease of internet stalking and the desire to find a woman who obviously didn’t want to be found, people quickly discovered and circulated the woman’s Instagram account. Even quicker, the woman was forced into hiding by the scrutiny and double standards placed on her as a woman involved in an apparently romantic encounter.

“She’s since taken her Instagram offline after receiving some harassing comments, at least one of which was related to Blair’s speculation about what happened when the pair simultaneously got up to use the restroom (and Holden’s cheeky comment that ‘a gentleman never tells’ when asked about it),” the Verge reports.

People were attacking the woman on her page calling her a "sl*t ", "sk*nk" , etc but they were praising the guy for it. She eventually deleted all her social media and expressed that obviously she didn't like her privacy being exposed like that. https://t.co/5WRsYFtlVc

The ordeal, which treats real-life people like characters, magnifies the instantaneity of internet celebrity and the ugliness of nonconsensual exploitation for clicks and likes. Even worse, Blair is all but acknowledging the harassment imposed on the woman she photographed and applied a fantasy plot to.

“I saw a story unfolding in front of my eyes recently and it filled me with the hope of possibility,” she wrote. But what about the possibility that what started as a sappy love “story” has turned dark and even scary for the very real woman at the heart of it?