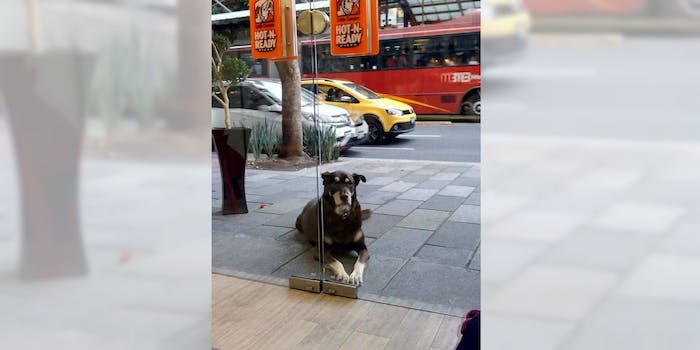 No more pizza for this good boy.

If you saw a good dog sitting outside of a pizza shop, you might be tempted to give him a slice. But one dog in Mexico City has apparently been given so much free pizza that he now wears a tag asking strangers not to feed him, according to BuzzFeed.

The tag hasn’t deterred this pizza-loving dog from standing in front of a Little Caesars every day and giving strangers pizza eyes.

A Facebook user named Estrella CR posted a picture of the dog last week, quickly getting over 1,800 reactions. BuzzFeed learned that the 10-year-old dog’s name is “El Jefe,” or The Chief, and is owned by employees at a nearby sex shop.

El Jefe’s begging techniques were so successful that he wears a tag (this being his second, as he lost the first) that says, “No me des pizza gracias.” The phrase translates to, “Do not give me pizza, thank you.”

While this dog can no longer accept pizza, it’s likely that good-boy pats and belly rubs are OK.