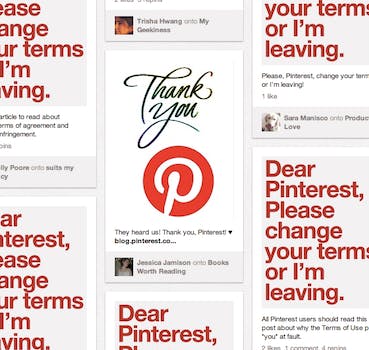 Its terms were so vague that some pinners deleted their boards in tears. Now, Pinterest is clarifying some of its more frightening clauses.

Since the purpose of Pinterest is for users to populate the site with images they do not own, the network has been in a legal gray area ever since users discovered that pinning content from around the Web might be on the wrong side of the law. Pinterest users, concerned that the sites’ vague policies could get them sued or worse, have even been deleting their boards to avoid uncertain punishment from copyright holders and Pinterest itself.

What’s more, few users who expressed their concerns with copyright were about to get a response from Pinterest. Until recently, the network has been skirting the issue, addressing just two bloggers’ concerns with legality.

Now, there should be no ambiguity about any of Pinterest’s policies. The network writes that the new terms, which take effect on April 6, two weeks from the date they were announced, “are easier to understand and better reflect the direction our company is headed in the future.”

In a blog post signed by “Ben [Silbermann] & the Pinterest team,” the social network highlighted a few of the most significant changes:

Second, Pinterest responded to the recent explosion of pro-anorexia and self-harm boards on Pinterest. After Tumblr banned similar sites, these topics began to crop up on Pinterest.

The site also announced new features. Soon, Pinterest wrote, there will be new tools to help copyright holders more easier report infringement. It also wrote in language that will “pave the way” for long-awaited new additions: a Pinterest API to aid developers in creating third-party Pinterest tools, and private pinboards.

Finally, Pinterest encouraged all users to review the terms and write in suggestions to [email protected]. (The Daily Dot is still awaiting a response to the support question we wrote to Pinterest two weeks ago.)

The announcement, which was posted on Tumblr, has netted hundreds of user comments since it was published this afternoon.

Surprisingly, over a hundred of the comments deal with a suggestion for Pinterest that was not addressed in the update: the prevalence of pornography on the site.