This Pinterest board is better dressed than your honors student.

Visit “My Imaginary Well-Dressed Toddler Daughter,” the Pinterest board of Philadelphia copywriter Tiffany Beveridge, and you’ll find a hopscotch of well-scrubbed, impeccably dressed children. Beveridge captions these curated images by channeling her imaginary daughter, Quinoa, who hangs out with well-coiffed dandies named Xanderson, Roylston, and Paleo. There’s a recurring best friend named Chevron, who recently endured a bad perm. They brunch, go to the beach, and hold puppies. 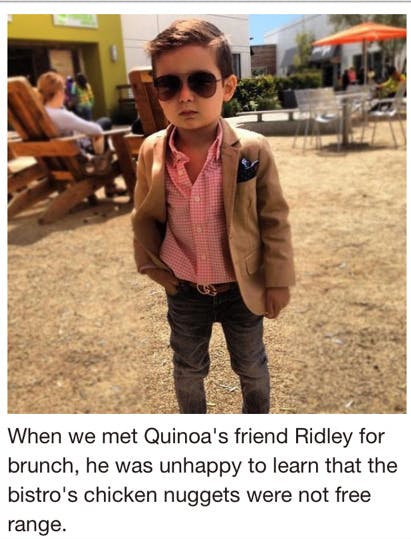 The photos, many of them from fashion editorials, border on the absurd even before words are added; if you look at some of these children long enough, they morph into tiny adults. But the absurdity feeds Beveridge’s narrative, allowing her to ascribe different personalities to her fictional protagonist. Her board’s followers talk about Quinoa as though she’s real, keeping the narrative going. Beveridge says Quinoa is definitely a Type A personality, but other personal details stay in flux. 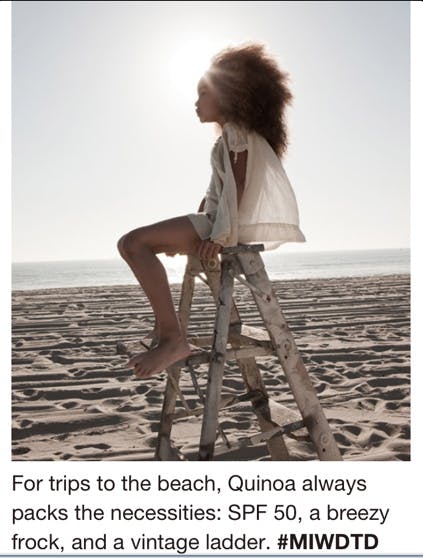 Beveridge is the mother of two boys, ages 10 and 15, who “couldn’t care less what they wear.” She started repinning photos of girls’ clothing from friends, and noticed “really over-the-top, highly-styled kids. The images were begging for sarcasm, so I just began writing little captions. The character just grew from there.”

Quinoa is the main character on the board, represented through a spectrum of girls in A-line dresses, colored tights, oversized glasses and impossibly volumized hair. But there is also a supporting cast, which creates a sort of fantasy world where Burberry-clad 6-year-olds are throwing parties, drinking lattes, and looking disaffected. Someone is probably already making this into a reality show. 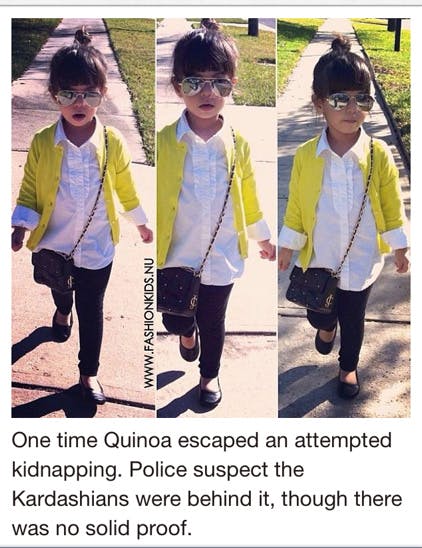 While there has certainly been an uptick in more creative parents whose kids become their sartorial canvases, Beveridge doesn’t think this is necessarily a generational thing.

“I’ve seen some pretty ridiculous old pictures in my day of overdressed little kids,” she says. “If they’d had Pinterest back then, Quinoa would have been dreamed up long ago by somebody else. But she would have been named Sunflower or something like that. And I’m sure some parents 100 years from now will be dressing their kids in some crazy designer hologram laser suits.”