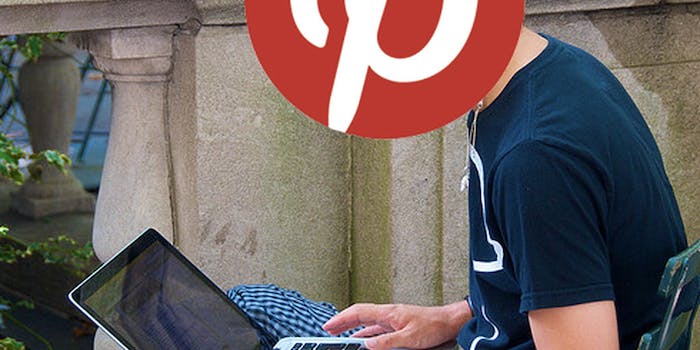 Pinterest is "by far the easiest social network to spam," says one spammer who makes $1,000 a day off the site.

Last week, the Daily Dot taught you how to spot a Pinterest spammer. Now that same spammer has spotted us.

After he read our article about his process of spamming Pinterest through thousands of bot accounts, Steve, who declined to give his last name, contacted us with an offer to clarify some of his methods. He proved his identity by providing a screenshot of his Amazon Affiliate account—the same final-fantas07 that we discussed in the aforementioned article.

We were shocked by some of the facts Steve shared. For instance, he makes $1000 a day, and out of his thousands of spambots, Pinterest has only deleted one.

As such, the Daily Dot decided to publish the entire interview. It’s a fascinating look at Pinterest’s Wild West and the spambots that inhabit it.

Could you tell us your name, age and occupation?

How do you describe what it is you do? We’ll refer to it as spamming for now. Have you spammed other social networks before?

Have you found it easier to spam Pinterest than other networks?

DD: When did you first discover you could make money off of Pinterest?

As the days came my earnings increased and increased and increased. First week of doing this I made around $2,000 which was Feb. 20-29. I stepped my game up and changed the way I was doing some things, and I saw a dramatic increase in my earnings. Went up to $500-800 a day.  Kept at it and for the past two weeks I have made over $1,000 a day with the highest earnings being around $1,900.

I fully expect next week’s earnings to be $2,000-2,500 a day. There are no guarantees in this business and it could all come crashing down soon. Not a matter of if, but when will it happen.

The Daily Dot recently published a story about a Pinterest spamming program available for sale at Black Hat World. Is your process similar to this one?

I guess you could say it’s like that. I don’t use his bot, and I didn’t create my own. His bot is very powerful for single accounts, but I use a lot more than one account so his bot would do me no good. Although he is adding a feature soon that will use multiple accounts, so I might have to look into it then. Just because I’m using almost 10 GB of bandwidth a day doing what I’m doing at the moment.

In our earlier story about you, we found tons of bots that traced to your Amazon affiliate account. How many would you estimate you have out there?

We called out your affiliate account in particular because it was the only one we could find. Are there a lot of other people on Pinterest doing what you’re doing? How many would you guess?

What do you do when your bots get shut down? What would you do if they all got shut down, and could that ever happen?

Trust me when I say Pinterest is NOT invite only. That’s a marketing ploy to get people interested, and women will fall for it instantly. No disrespect intended to anyone.

Anyone who liked/repined anything I posted, I thank each and every one of you. Sometimes I see users posting all kinds of valuable information on my pins, and some even review the product themselves. So really I could say I’m helping some people by showing them a product they might else have never heard of. But in the end I am profiting off it, but which site doesn’t these days? Not trying to justify what I do, but it is the truth, at least from what I have seen.

UPDATE: The day after this was published, Steve told the Daily Dot that he really wasn’t a spammer. We’re not sure where he lied—in telling us he was a spammer or telling us he’d lied about being a spammer.