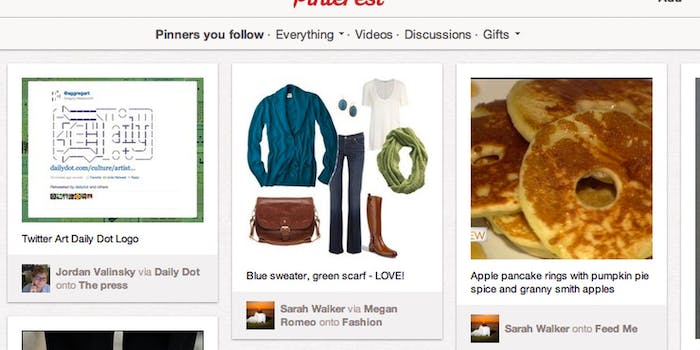 Making photo-sharing as easy as pinning a photo on a bulletin board is sparking the growth of a new community.

If you haven’t heard of Pinterest yet, you will soon.

Pinterest is a kind of virtual corkboard, without the first-world-problems pain of being pricked by thumbnails. Users “pin” their favorite pictures from around the Internet to their wall which followers can see.  To pin, you drag a bookmark to your toolbar and and press it when you want to pin, or post, an image.

Users create “boards” or categories — say interior design or fashion — and place pins on them. If a picture strikes your fancy, you can like it or repin it your wall.

As of now, the site is invite only. To create an account and start pinning, you have to get an invite or have a friend already on the site invite you.

By staying simply focused on images you find online, rather than your own photos, Pinterest removes some of the performance anxiety photo posters face. On Facebook, for example, do you tag your friends or not? What privacy settings do you pick? And ohmigosh, should you organize it into an album?

Even Tumblr, once the standard for ease in media sharing, seems demanding in comparison to Pinterest: download the photo, log in to Tumblr, upload the photo, write a caption, set a clickthrough link.

But careful, though: You might get stuck into a vortex of pinning. Fans complain, in a good way, about how addicting it is to add photos to their wall so they can share it with friends.

“I’ve been sucked into the Pinterest vortex,” tweeted RetroLearning. Jessica Beeman tweeted, “If I never write book, blame it on Pinterest…”

Besides the ease of pinning images, the ability to create mini-communities (a pinboard dedicated to “clever food” has 17,000 followers) about topics you and your friends are interested in has also sparked its popularity.

Another plus: the site’s clearly spelled out Pin Etiquette. Users are encouraged to source their pictures and not to use it for self-promotion. (Follow us, though!)

The site unveiled a redesign this week to mixed reaction. Aside from a fresh coat of paint (strawberry milkshake, it appears), and an added discussion section highlighting most talked-about pictures, the site is taking a dip into the crowded video market. Now users can pin their favorite videos.

Similar to any website redesign, there have been some kinks.

“Notifications on Pinterest are still broken. The redesign seems pretty run of the mill. Lame.” tweeted Trevor Christensen. Others noticed a log-in issue.

But for every hater, there seems to be a lover of the site.

People love to share images and talk about them, so Pinterest seems like it has good prospects of becoming a thriving community. Quantcast, an audience-measurement service, shows them as having 337,000 users as of July, growing at a steady clip. The biggest challenge we see? Keeping things simple.