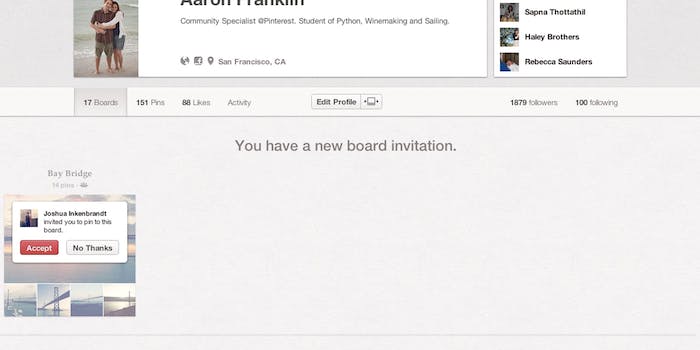 The new features will keep parts of your profile from being hijacked.

Citing user feedback as the reason for the update, a Pinterest spokesperson blogged that the changes would take effect Thursday morning.

Until now, group boards have been one of Pinterest’s biggest security flaws.

Previously, Pinterest has not required users to confirm their participation in a group board. When someone added you as a collaborator, that board automatically appeared on your profile—you could remove it, but many didn’t. Essentially, anyone could put any board on anyone else’s profile. The feature has been used to hijack brands for self promotion and deluge businesses with spam. It’s even caused well-meaning pinners to engage in hijacking unintentionally.

Some of Pinterest’s top users have raised awareness about the consent problem by making a point of mentioning it in their profiles.

“I politely request not to be added to any Group Boards without my consent,” writes Joy Cho on her Pinterest profile. Cho is the eighteenth most followed user on Pinterest.

Pinners will undoubtedly applaud Pinterest’s attempt to value their consent, but we can’t say for sure. Along with this update, Pinterest has disabled comments on its blog, and deleted all user comments on previous posts. For example, the comments we quoted in a previous story no longer exist.

It’s a far cry from the old, silent Pinterest, which ignored users and neglected to comment on issues until panicked rumors got totally out of control. The new Pinterest runs a tight ship. But with feature updates like these, we’re not complaining.