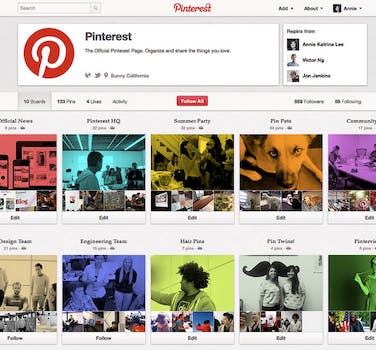 The official Pinterest page reopened today after a year-long hiatus.

On the Pinterest blog, marketing and community specialist Anna Katrina Lee wrote that the image-sharing network’s page would share pins of everything from official news to office hairstyles.

“As we’re working hard to build Pinterest just for you, we hope to bring you pins from our headquarters that are interesting and useful,” she wrote.

From the network’s birth in 2010 to the middle of 2011, the Pinterest official profile was far less personal. Its boards focused on repinning popular pins in each of Pinterest’s categories. But after Pinterest began to grow exponentially in the tail end of 2011, there was less time to update it. A spokesperson told the Daily Dot:

“I’m not sure of the date [we stopped updating] but priorities were definitely a factor. There were lots of other great people and boards to follow but we were the only ones who could build and improve the site and support the community, so that was the clear priority. The new Pinterest account offers something unique and content that only we can provide, which is part of why we decided to start it back up again.”

Pinterest’s staff has grown from 16 people to more than 60, leaving much more time and manpower to devote to the Pinterest page. But why now?

The spokesperson told us the thought came up after Pinterest’s summer party. How could they easily and quickly share their photos with attendees? Duh, pinning.

“We had all of these great photos of the pinners who came, the activities, the food and our new office,” he said. “We didn’t have a great way to share them with the community, and so we started thinking about the best way to do that.”

Now, Pinterest events will be immortalized on the official page, along with anything else the company wants to highlight for its 1,000-and-counting followers.

“The new page will enable us to highlight unique and interesting people and activity on Pinterest,” the spokesperson wrote, “while also giving the community a way to meet the people are building and supporting site.”