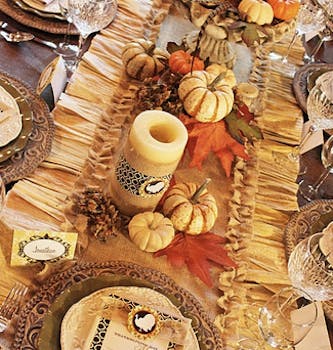 Pinterest’s official founding date is sometime in March 2010, when the site first went live. But five months before that came an equally important day—Thanksgiving.

Pinterest’s official founding date is sometime in March 2010, when the site first went live. But five months before that came an equally important day.

According to a Pinterest spokesperson, CEO Ben Silbermann marks Thanksgiving Day as an important date in the image-sharing community’s history.

“Ben considers their founding Thanksgiving Day 2009, when his then-girlfriend, now wife, gave Pinterest its name,” she told the Daily Dot.

This year, Pinterest HQ doesn’t plan to commemorate this more informal birthday (the celebration will be held in March), but acknowledges its importance.

“Coming up with the name ‘Pinterest’ was an important milestone for the company,” a second spokesperson told the Daily Dot. “We’re humbled that millions of people now use a service that was only beginning just three years ago.”

Here are some of the reasons why we’re thankful for Pinterest this Thanksgiving:

1) It makes holiday shopping a cinch.

Don’t know what to buy your fashionista aunt Milly or trendsetting cousin Mark? No problem—just check out what they’ve pinned to their “wishlist” pinboards. When your friends and family belong to a network whose whole purpose is to archive things users love, you have no excuse for not knowing what they want this year.

Just be sure to do them the same favor and neatly organize all the stuff you’d like.

While many social networks (cough Facebook cough) reveal your every move, Pinterest allows you to hush up about what you want to keep hidden. No, we’re not just talking about the new secret boards feature, which lets you pin in private.

On Pinterest, you have the option of verifying your website and identity—or not. You can show people your real name or come up with a pseudonym. You can tie your pinboards to Facebook and Twitter or stay deliciously hidden. Whether you’re an oversharer or just want a place to quietly keep photos of kittens, Pinterest works with you.

3) It’s an escape from the real world.

Bad day at work? No worries, you can take a break from everyday problems in the fantasy world of your pinboards. It’s easy to forget about your apartment falling apart while you’re pinning photos of personal bowling alleys to your “dream home” board.

Even better: Pinterest therapy is absolutely free! Just don’t get tempted by any of the new commercial accounts. Businesses using this new setup will make it easy for you to purchase everything they pin.

You will never have your pinning interrupted by chat requests or direct messages of any kind. Apart from comments on pins, there is virtually no way to get in touch with any other user. A pinned photo may be worth a thousand words, but it’s a lot quieter than actual text clogging up your profile.

This Thanksgiving, if your relatives get to be too much, you can always retire to the white noise of Pinterest.