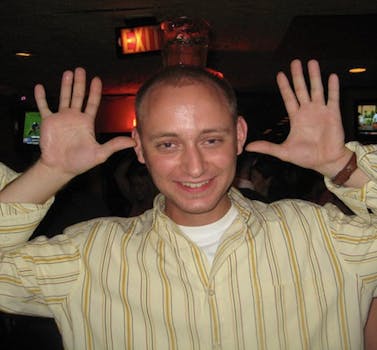 Single, ready to mingle, and easily contactable through Pinterest.

Call it the First Law of Social Media: If there’s a way to meet people on it, users will find a way to hook up on it.

Now, a Washington, D.C. man is hoping he can get a date using Pinterest.

The image-sharing social network is famous for its female majority. Hardly an article on the site is published without proclaiming something like “Women are from Pinterest.” That reputation encouraged Sean Roberts to toss his hat into the Pinterest dating pool.

“I noticed that all the girls in the office were loving Pinterest, so I said to my co-worker, Laura, I guarantee you that no one ever put their picture up there to try and get a date,” he told WTF Pinterest. “So we did it.”

The 27-year-old Roberts’ pin is the only one on coworker Laura Miller’s “boys!” board. To make sure dream dates don’t miss it, the pin includes his phone number and email for all to see. To dispel any ambiguity, Miller has also added, “Repin my cute coworker! He’s single and ready to mingle.”

Since last week, Roberts has been steadily receiving repins and emails, but he’s yet find anyone that’s girlfriend material.

“[Of the people who contacted me,] a lot are kind of weirdos or just not in the area,” Roberts told the Daily Dot.

“The calls and emails I have gotten have been mainly from people all over the U.S.A. but not a lot locally. So its been tough to actually meet up with these people.”

When Roberts does accept a date, he said Pinterest will play a big role. He’ll definitely be screening potential dates’ pinboards for interests (or the inclusion of an overzealous wedding themed pinboard). He also hopes to “pin” his dates.

“I expect I will have a first date lined up by next week and will tweet about it and post a pic or two on my Pinterest page,” he told us.

Roberts has promised to keep the Daily Dot updated on his first date. Stay tuned to find out if it’s a good idea to pin your own dating ad on Pinterest—or a total disaster.