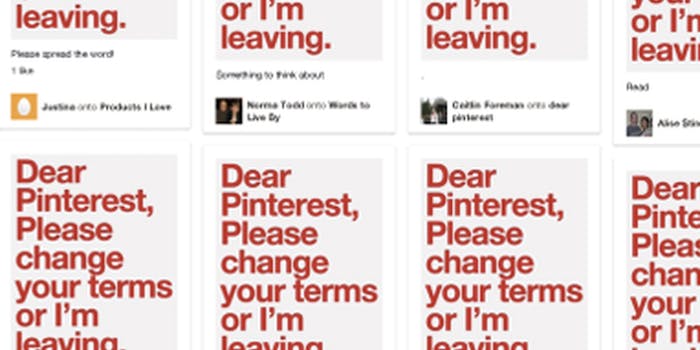 In a statement to the Wall Street Journal, Pinterest attempted to quells users' concerns about the legality of the image-sharing network.

In a statement to Wall Street Journal’s Law Blog, the network said that while these concerns are nothing new, users shouldn’t have anything to worry about.

“The protection of copyrighted content is by no means unique to Pinterest—virtually every site on the web that allows users to express themselves contends with copyright complexities.”

Pinterest wrote that it would “strongly encourage” users to credit the original content creators on their pins and to check for “Pin It” buttons to see if an image is safe to pin. Finally, the company stressed that copyright holders could use the “no pin” code to keep their images off of Pinterest.

“As a company we care about respecting the rights of copyright holders and have outlined on our site best practices that people should abide by when adding pins to make them useful to themselves, the community, and the content owner.”

Since January, Pinterest users have been concerned about the possibility of being sued for sharing other people’s images on the rapidly growing network. This concern led to speculation from tech bloggers and lawyers as to whether or not the service is safe to use.

The Law Blog post that prompted the official response, How to Use Pinterest Without Breaking the Law, is by no means the first or most notable post on the subject.

Earlier this year, photographer and attorney Kristin Kowalski became the reluctant spokesperson for the controversy after her blog post, “Why I Tearfully Deleted my Pinterest Inspiration Boards,” went viral. Her Internet fame earned her a chat with cofounder Ben Silbermann, but no resolution.

Just this month, a Chicago design studio started a movement to demand Pinterest change its terms of service, which some thought to be a legal gray area. Even though the studio reported 40,000 participants, no official response from Pinterest was ever received. That led to panicked users debating among themselves about the dystopian consequences of a misappropriated pin.

“i dont get it. Are there Pinterest police?” commented Tracy Saunders.

Pinterest’s official response has arrived late, but may serve to quell any further panic.

Thanks to Pinterest enthusiast Sophie Hewitt for the tip! If you have a story tip, please email [email protected].

Photo via the Window Seat