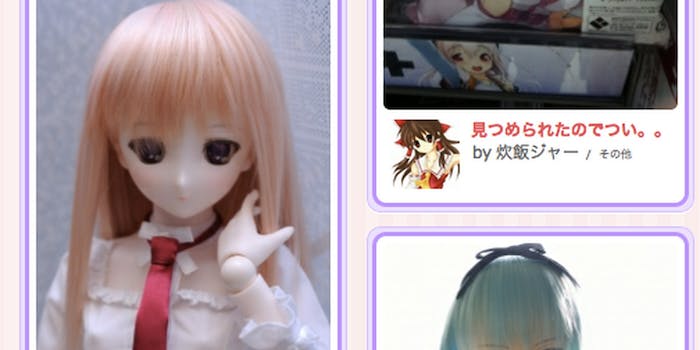 Bizarre Pinterest clone lets you show off your anime crush

“Site for Bragging about My Waifu” lets users pin the anime objects of affection in more ways than one.

We found the strangest Pinterest clone yet: The NSFW Ore no Yome wo Jiman Suru Saito (Japanese for “Site for Bragging about My Waifu”).

For the uninitiated, a “waifu” is a female Japanese anime character that a fan likes so much that he surrounds himself with posters, plastic models, or other likenesses of her. For example, a university student brought a cardboard cut-out of an anime fox girl on vacation with him. In popular culture, there’s the portable hug-pillow version, like in James Franco’s 30 Rock spoof.

Of course, bragging about your strange obsession in mixed company might only be met with stares. That’s where “Site for Bragging about My Waifu” comes in. Users can show off the objects of their affection to other fans without fear of being judged.

The site works like any other Pinterest clone, according to Crunchyroll’s bilingual tester Emily Balistrieri, with the exception that cartoon nudity is welcome and everything is in Japanese.

Once you’re in, the site encourages you to post photos of your posters, cardboard cutouts, model figures, body pillows, or anything that best depicts your waifu (even if it’s not safe for your cubicle). You can also comment on other users’ photos or just “like” them by clicking the big pink “Kita Kore” button, an enthusiastic phrase we’ve so far been unable to translate.

Back in May, there were no Japanese Pinterest clones listed in the Pinterest Clones Directory, a fact we attributed to Japanese e-commerce company Rakutan Inc.’s enormous investment in the actual Pinterest. (“Site for Bragging about My Waifu” still is not listed.)

However, the chances that a site for hardcore anime fans will impede Pinterest’s potential in Japan are slimmer than the waists of these busty waifus.