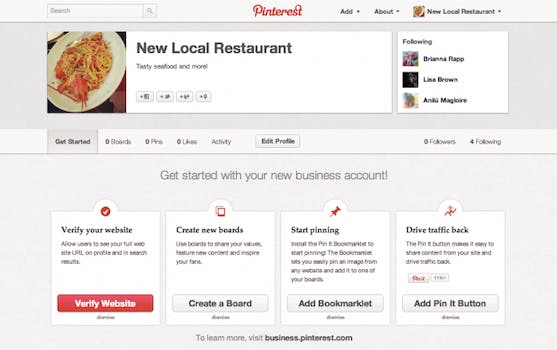 Pinterest is starting to come around to commercial pinning, but companies will only be allowed in if they register for Pinterest for Business pages.

It appears that the U.S. Supreme Court and Pinterest will have to agree to disagree: At least in the latter’s eyes, corporations are not people.

On Wednesday, the image-sharing community announced that businesses on Pinterest will now abide by a different set of terms than “regular people:”

“We want to help more businesses provide great content on Pinterest and make it easy to pin from their websites,” Cat Lee, product manager, wrote on the blog. “Today, we’re taking a first step toward that goal with some free tools and resources.”

Most importantly, Lee said, businesses will now be required to apply for Pinterest for Business pages, which identify them as separate from individual users. These accounts are different from user accounts because they include audience engagement tools and other widgets that would be useful for businesses but not to the average user.

From Nordstrom to Whole Foods, there are more than 750 businesses and brands already using Pinterest. This is despite the fact the commercial pinning has been banned on Pinterest since its beginning—with a partial lift of that ban in late July.

Under the new terms especially for businesses, commercial pinning will be legal for the first time. However, it’s unlikely any businesses will be taking advantage of that. So far, Pinterest doesn’t have plans for streamlining commercial transactions on the site.

“This is not about monetization or business models,” Lee told AllThingsD.

What will change? New business profiles and tools will make it easier for users to identify and follow pinboards from brands they love.