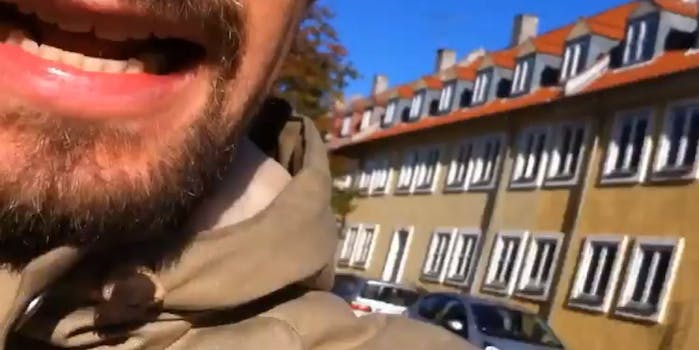 Thomas Dambo would do whatever it took to get back his pony.

The other night in Copenhagen, a pair of men stole Thomas Dambo’s pink pony. It wasn’t easy. The statue had previously stood rearing over a public park, its hindquarters bespeckled in stars, its rainbow tail flowing lush and free. But then the men came along, bearing a saw and a grim agenda. They severed the pony from its pedestal, hauling it away in the night.

Upon seeing the mutilated stump where his pony once stood, distraught Dambo immediately put up a €40 bounty on Facebook, asking for help. Copenhagen is apparently the biggest little city in all Europe. One of Dambo’s buddies actually had a lead: He’d seen the men make off with the pony the other night, at around 2 am. He even had an address.

The next morning, Dambo marched out to confront the pony thief face-to-face. Luckily for us, he dutifully recorded everything.

Let’s go on an adventure in Danish vigilante justice.