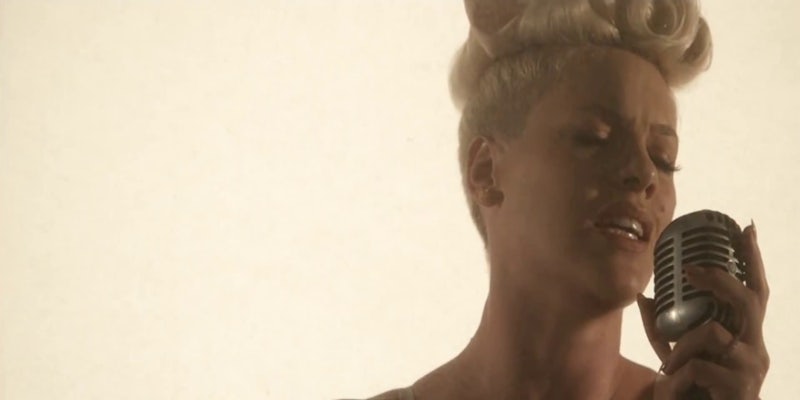 Having body-positive role models for women is great, until they decide to get skinny.

When someone like Pink, known for her athletic build is forced to defend herself against fat-shaming trolls, it reinforces the need for strong body acceptance advocacy for people of all shapes and sizes. But it also makes me wonder if celebrities who advocate for body positivity in their heavier periods only to lose weight before their next movie or music tour are actually helping the cause.

Pictures from last week’s John Wayne 2015 Odyssey Ball of the pop star wearing a black dress with a deep plunging neckline showed an allegedly heavier Pink than what the public is used to. Social media users quickly spewed hateful comments her way, calling her, among other things, a “fat bitch.” She tactfully responded in an Instagram post: “So, my good and concerned peoples, please don’t worry about me. I’m not worried about me. And I’m not worried about you either … I am perfectly fine, perfectly happy, and my healthy, voluptuous and crazy strong body is having some much deserved time off. Thanks for your concern.”

While Pink’s message is rich with body confidence and self-acceptance, she also points out that she’s letting her body have some “time off.” I assume this means that eventually her break will be over, and she’ll work her way back to immaculately toned physique. The question for me is whether this taints the positive perspective she’s currently promoting. Or maybe we don’t expect someone like Pink to stay at a heavier (for her) weight, but what about our token “big girls?” How would we feel if Lena Dunham or Adele slimmed down to being Gwyneth Paltrow slim? Would we feel betrayed?

When celebrities exist outside the size-four or the fashion-world ideal, they become representatives for the average person by default. They present successful alternatives to the unrealistic standards most of us could never comply with.

One reason is because it feels good to see someone who resembles you in the limelight. Laura Bogart writes for Salon about seeing herself in Melissa McCarthy:

I’d needed to see a body like mine belong to anyone other than the sad-sack best friend or the mother of the bride, to see my own arm flab and heavy belly alongside the wasp-waists and toned shoulders of the leading ladies. When samurai badasses must possess the leggy grandeur of Uma Thurman and love interests can only be played by Natalie Portman … all I hoped for was visibility.

I know this desire intimately. At the vulnerable age of 20, not yet comfortable with my plus-sized frame, I felt hope stir in me as I watched Colin Firth and Hugh Grant fight over the curvy Renee Zellweger in Bridget Jones’s Diary. I still remember a few years later how I felt when, in the film’s sequel, Firth said, “I happen to have a very high regard for your wobbly bits.” It felt possible that someone would love my wobbly bits, as well.

In the back of my mind I wondered, if Zellweger needed to lose weight, did I?

And I remember the disappointment I felt when I saw her knobby knees in Chicago, how small she seemed next to Catherine Zeta-Jones who, though curvy, also didn’t seem to have any wobbly bits. How un-Jones-like they both were! In the back of my mind I wondered, if Zellweger needed to lose weight, did I? I never consciously said that to myself, but I know that’s what I felt.

Lifestyle and Entertainment magazines constantly run articles on how a star slimmed down and how “you can do it too.” Individuals like Kelly Clarkson or Tyra Banks have notoriously fought against this push to obsess about the scale, but there’s a flipside to this. It’s common to criticize celebrities who slim down after seeming confident about their above-Hollywood-average weight. Now Magazine, for instance, believes Beth Ditto “succumbed to the pressure to be skinnier” because she was getting married.

Celebrities known for being larger often feel the pressure to stay heavier. Seth Rogen believes he sold out his fans by losing weight. In an interview with Glamour Magazine, America Ferrera confesses:

Sometimes I worry more about losing weight than gaining weight, because this is how people know and accept me. I do feel like if I wanted to get in better shape, there might be a backlash of, “Why isn’t she comfortable with herself anymore?” So I try to figure out what my own goals are.

Ferrera, the star of Real Women Have Curves, is speaking of the personal pressure she feels to be a role model for curvy women, the result of which is her assumption that she’d have to defend whether she lost weight for health reasons or because she gave in to the pressure of the industry. Maybe part of the burden of fame is being accountable to your choices—even one as simple as losing weight.

What I know looking back on my Zellweger weight loss disappointment is that I expected her to remain frozen in the state that most resembled me so that I could feel good about myself. I needed to stop comparing ourselves to others to find acceptance, and I think for the most part I have. Now in my thirties with a body that has even more wobbly bits than I did at age 20, I have found a still imperfect, but working body confidence. I feel sexy in my skin—at least most of the time. And I found that the more confidence I’ve gathered over the years, the less I look to celebrities in particular to tell me what is beautiful.

Maybe part of the burden of fame is being accountable to your choices—even one as simple as losing weight.

Now I find myself more concerned about what others have to say on a political level. The backlash against Pink’s insignificant weight gain reveals the level of animosity this country is capable of dredging up toward those who challenge the skinny standard.

If individuals, famous or not, want to be body-positive advocates, it should be less important that they maintain a static body state, and instead that need to be outspokenly confident and positive about their bodies in all its stages. If Pink, Kelly Clarkson, Beth Ditto, and others who are criticized for weight fluctuations report that they feel healthy and beautiful at 120 pounds or 200 pounds, let’s support them. This is the message of the The Health at Every Size (HEAS) movement, which allows individuals the agency to decide for themselves what is healthy.

I do believe it is important for there to be diverse representation of individuals in the entertainment industry. We need people whose talent and presence we admire of all ages, heritage, size, gender and sexual identities. Not so that we can feel good about seeing ourselves mirrored on the screen, but because it helps society move forward in accepting that all of these identities are valid and valuable.

In an ideal world, none of us would feel we need to change our age or gender or shape to find respect; we wouldn’t rely on a narrow Hollywood standard to find our worth—we’d look inward instead.

Jera Brown is an emotional eater, piloxing instructor, queer, poly and a Christian. She’s the author of emotichew.com, a blog about body positivity, healthy self-worth, healthy eating, spirituality, and sexuality.