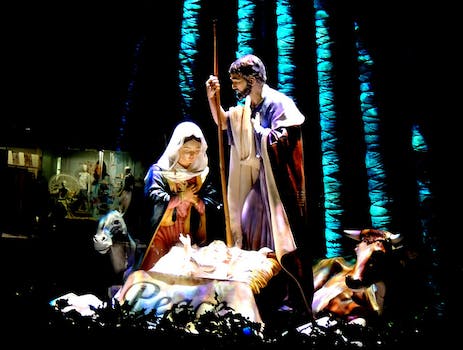 Nativity scenes have now been elevated to a type of performance art. Last week, a town in Ohio became the focus of a national news story when resident Jasen Dixon was ordered to take down his zombie nativity scene.

On Christmas morning, another nativity scene in Haverhill, Mass., caused even more of an uproar when baby Jesus was stolen and replaced with a severed pig’s head.

The baby Jesus reportedly went missing from a nativity scene at Sacred Hearts Roman Catholic Church on Dec. 25, and Haverhill’s mayor James Fiorentini said it had “all the elements of a hate crime.”

Fox25 reporter Catherine Parrotta posted a photo of the head in question.

This is apparently not the first instance of pork-based vandalism in the area.

Police say pigs heads were also left at a church in the Ward Hill section a few years ago. That crime was unsolved #fox25

Another baby Jesus was also reportedly taken from a nativity scene in Greenfield Town Common the night before. During a Friday press conference, officials said the head appeared to be “freshly decapitated” and are asking the public for help tracking down the vandal or vandals.