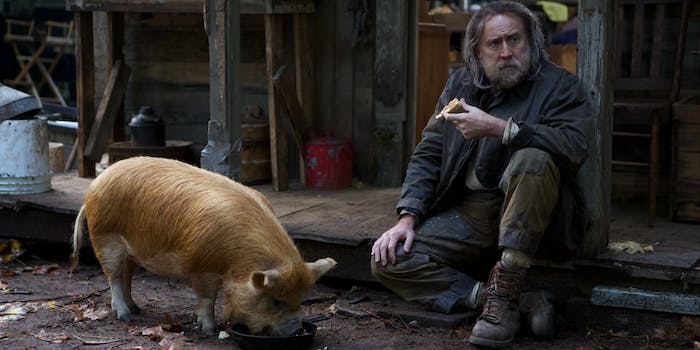 This fascinating indie thriller sees Nicolas Cage hunt down the kidnappers of his beloved truffle pig.

Never one to turn down an unusual project, Nicolas Cage is an attention-grabbing choice of star for Michael Sarnoski’s debut feature, Pig. And once Cage’s name has gotten people in the door, they’re in for a treat. Riffing on the structure of John Wick-style revenge movies, this indie thriller is disarmingly sensitive, eschewing violence (well, mostly) in favor of lovingly-filmed depictions of food and cooking.

RELEASE DATE: July 16, 2021
DIRECTOR: Michael Sarnoski
RELEASE: Theatrical
Nic Cage stars as a reclusive truffle-hunter in this unpredictable thriller, tracking down the people who kidnapped his truffle pig. This journey takes him to the heart of Portland’s food scene, with Alex Wolff co-starring as his self-absorbed young guide.

Robin (Nicolas Cage) is an aging hermit who lives in a rundown cabin in the Oregon woods. His only companion is his beloved pig, who accompanies him on truffle-hunting expeditions. This provides Robin’s only source of income, via weekly visits from the smarmy young truffle-dealer Amir (Alex Wolff), the sort of person who probably takes business advice from finance bros on YouTube. These two men couldn’t be more different. Unkempt and dilapidated, Robin aggressively rejects human society. Meanwhile, Amir drives a bright yellow sports car and wears tailored suits, interrupting Robin’s silence with annoying small talk.

Asking Robin to invest in a phone, Amir seems embarrassed to rely so heavily on the whims of this inconvenient weirdo. Robin represents everything he’s tried to eliminate from his life, and vice versa. In Amir, Robin sees the unpleasant sheen of pride, money, and a weak-willed desire to please other people. And Robin’s filthy, self-sufficient existence is powerfully disturbing to a person like Amir, who desperately wants to seem impressive in other people’s eyes.

This uncomfortable arrangement might have continued indefinitely, if not for a violent attack on Robin’s home. In the dead of night, someone attacks Robin and steals his pig, leaving him to wake up the next morning with a head wound. With Amir as his only viable contact, he sets off to hunt down the kidnappers. Who, exactly, would kidnap a truffle pig? The field of potential suspects sends Amir and Robin on a quest through Portland’s fine-dining community, an increasingly surreal journey marked by chapter cards listing pivotal meals: “Rustic mushroom tart,” “Deconstructed scallops.”

Pig offers us one of Nic Cage’s more subdued performances, but he doesn’t need to be in full manic form to be a disturbing presence. Robin’s utter lack of self-consciousness—illustrated by his unwavering stare and unwashed, bloodstained appearance—is intimidating in itself. Emerging from the forest in search of a missing animal, there’s a sense of something feral about him. At the same time, he’s more humane than many of the people we meet along the way. Weighed down by an old grief, he wears his heart on his sleeve and invites others to do the same. For Amir, a day in Robin’s presence acts like a bizarre form of therapy, forcing him to confront difficult topics that he usually hides behind his glossy hustle persona.

Couched as an offbeat revenge thriller, Pig is really a story about authenticity; a fraught topic in the food world. Truffles themselves are a perfect example, romanticized for their rareness and difficulty to find. These stinky blobs are rooted out by pigs and dogs, an earthy process that somehow adds to their allure. Once discovered, they’re transmuted into delicious meals at high-end restaurants—and into money. The pig’s kidnappers are, we assume, mostly concerned about the latter. This motive feels even uglier once we learn more about Robin’s intimate relationship with food, moving people to tears with his expertise as a chef.

Featuring a well-chosen supporting cast of idiosyncratic characters, Pig is a rewarding vehicle for Cage and Wolff. Echoing Jim Jarmusch, it’s a largely character-focused drama that plays with a handful of genre tropes in a genuinely peculiar setting, celebrating the emotional power of food.