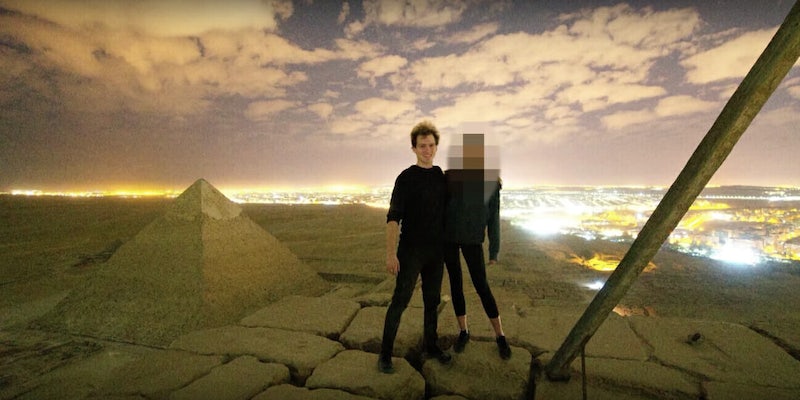 Another day, another reason to believe nothing is sacred these days—not even the 4,500-year-old Great Pyramid of Giza. A Danish photographer is being investigated by Egyptian authorities after he posted a photo and video of himself appearing to have sex with an unidentified woman at the top, the Daily Mail reports.

The picture appears on Andreas Hvid’s website, which has sections on “Rooftopping” and “Nude Art” (the snap was posted on the latter). On YouTube, a three-minute video of the couple climbing the pyramids before having sex, naked, also made the social media rounds.

As Metro noted: “He appears to be in the missionary position with a woman on top of the world-famous landmark,” with Cairo in the background.

Israeli newspaper Haaretz quotes Egypt’s Ministry of Antiquities as saying the incident “violates public morality” and “has requested the Attorney General launch an investigation.” The paper mentions Hvid “climbed the tallest of the three Great Pyramids.” News.com.au notes that it’s far from the first time someone has evaded security and snuck into the pyramid.

“One hundred percent it is photoshopped…There is no way anyone can enter the Pyramids area at night,” former Egyptian Minister of Antiquities and former director general of Giza Plateau Zahi Hawass tells NBC News.

It’s, in fact, illegal to climb the pyramids above a certain level, and certainly not after it’s closed to the public after 5pm, notes Metro.

The video was taken down last week, but the photo remains on Hvid’s website. (The photo has made its way to Twitter, too.)

Another video on Hvid’s YouTube shows an unidentified woman removing her top. Posted on Dec. 8, he writes in its description, “In late November 2018, a friend and I climbed the Great Pyramid of Giza (a.k.a. Pyramid of Khufu, Pyramid of Cheops). Fearing to be spotted by the many guards, I did not film the several hours of sneaking around at the Giza Plateau, which lead up to the climb.”

He has yet to be arrested or fined, although Haaretz recalls a German teen having been arrested by Egyptian authorities back in 2016 “for scaling one of the pyramids.” Real or photoshopped, punished or not, here’s to hoping this guy’s stunt serves as a cautionary tale against defiling sacred tombs.