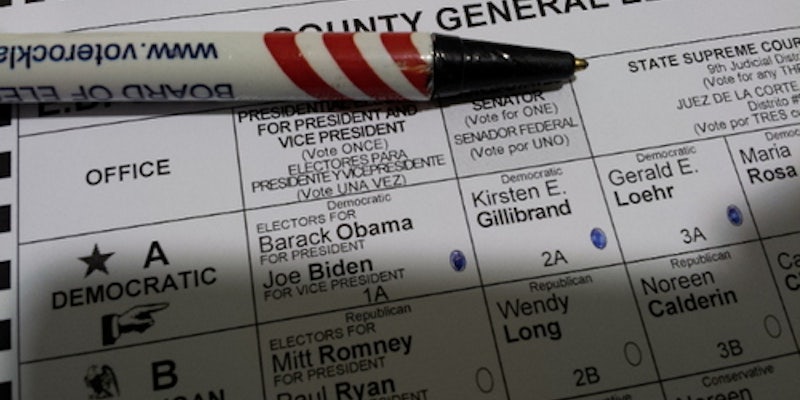 Photographing your ballot is illegal in some states

Take a look at your state's laws before you Instagram your vote.

In certain states, by pressing that “post” button you just committed a crime.

Some states “expressly prohibit the use of photographic and recording equipment inside polling places,” according to the Citizen Media Law Project. These include Georgia, Kentucky, Michigan, Texas and key battleground states Florida and Nevada.

“If you want to take photographs or shoot video inside your polling place, you must be cautious to avoid violating the law,” Citizen Media Law Project stated. They also inform photographers that if they choose to take photos, they should be discreet, not interfere with other voters and respect the buffer zone.

But every state is different. If you want to document your experience, you should check your state’s law regarding photographing or filming in a voting booth and polling place.

For example, if you live in Delaware, there’s no law that prohibits Instagramming a ballot, but if you live in Wisconsin, you could be charged with a Class I felony under state law.

“Whether you’re vlogging about which candidate you support, capturing footage of the long line at your polling place, or encouraging your friends to get out of the house and go vote, we’re inviting you to send us your Election Day videos,” Olivia Ma wrote on the official YouTube blog on Monday.

A search for “#vote” on Instagram currently has over 536,000 results, which includes people with “I just voted” stickers, long lines at polling locations and plenty of ballots, both sample and within the voting booth.

However, the laws are uncertain about photographing blank ballots.You should also be aware of state laws that prohibit interference with the voting process of others, so if you want to photograph a ballot at all, make sure it’s your own.