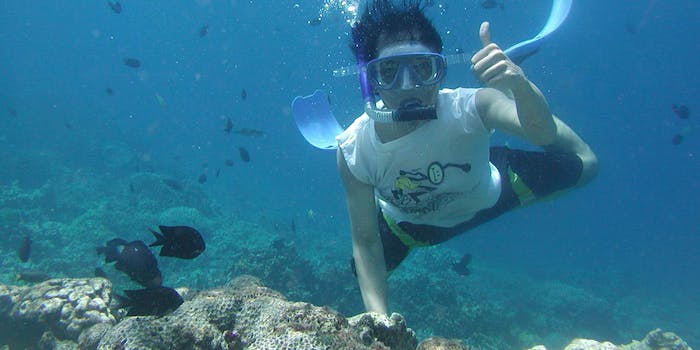 This is one resilient cell phone.

If it weren’t for the fact that this phone’s brand is never mentioned, we’d suspect this video were a nifty piece of viral marketing.

YouTube user Gregory Halpin caught this footage when his brother (inexplicably) tried to throw his cell phone to him while swimming in the ocean. His brother missed and the phone fell into the water, but astonishingly, it survived. It even kept filming all the way down to its resting place on the ocean floor.

Since neither Halpin nor his brother were experienced divers, the owner of their boat offered to swim down and retrieve the cellphone, which amazingly survived unscathed.

That is one resilient phone. And to think some gadgets can’t even survive being dropped on the bathroom floor.Photo via Asep.saefulloh/Wikimedia (CC BY-SA 3.0)