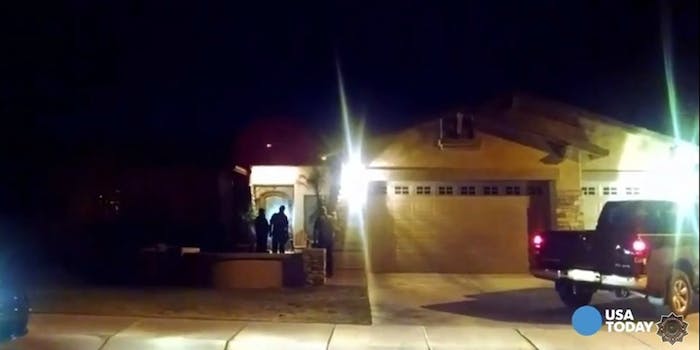 Photography is Not a Crime/YouTube

Don't forget to vet the tips you might receive on social media.

A quick piece of advice for those who dally in the art of bounty hunting: Don’t crash the house of the local police chief and then refuse to leave after you realize you have a case of mistaken identity. Either that, or don’t forget to vet the tips you might receive on social media.

Unfortunately for this group of 11 bounty hunters, who were looking for a fugitive from Oklahoma, they ended up at the house of a man who had friends who could detain them against their will.

As the Arizona Republic reports, the bounty hunters ended up at the house of Phoenix Police Chief Joseph Yahner late Tuesday night. After one of them, Brent Farley, refused to leave the premises even after it was clear Yahner did not fit the description of the fugitive they were hunting, he was arrested and charged with criminal trespassing and disorderly conduct.

Farley and 10 of his colleagues, who work for two fugitive recovery companies, apparently waited for two hours around Yahner’s house before approaching it at about 10pm MT, banging on the door and demanding that a man named Roderick come outside. As ABC News explains, the bounty hunters took an unconfirmed tip from social media about where they could find the 6-foot-3, 310-pound black man for whom they were looking. Instead they found Yahner, who is white.

Here was the scene, via cell phone.

Police said the man banging on the door had an unholstered weapon before a man inside the house (who was apparently Yahner) twice says, “turn the light off” to the man who was holding a flashlight outside. Yahner, clad in his boxer shorts, than reemerged from the house with a baton, police said, and got into a heated confrontation with the man outside.

“After awakening him (Yahner) from a dead sleep, he comes out in protection mode,” Phoenix policeman spokesman Sgt. Trent Crump said, via the newspaper. “And when he does come out and he challenges them, I think they quickly come to realize (the mistake), with the exception of one of them.”

More from the Republic:

Bounty hunters are often outfitted just like policemen, with bulletproof vests and weapons. And they are not hindered by rules that typically govern law enforcement, such as needing to go before a judge for a warrant or a subpoena.

John Burns, former president of the Arizona Bail Bondsmen Association, said Arizona is one of the few states that don’t require bail bondsmen or fugitive recovery agents to be trained or educated. Burns has been working to push a bill that would require both, he said.

Weak laws, he said, allow virtually anyone to be “John Wayne all day long, without any education or training.”

Screengrab via Photography is Not a Crime/YouTube