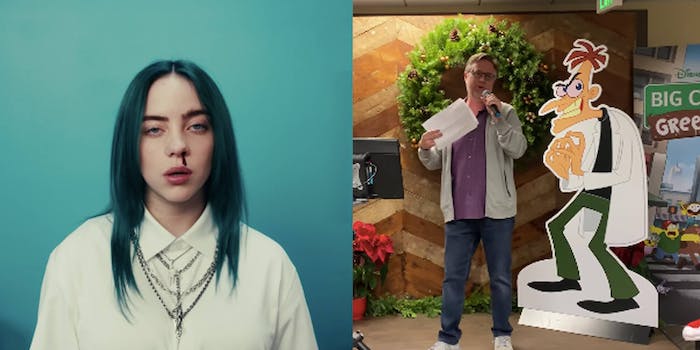 The voice actor for Dr. Heinz Doofenshmirtz took on a rendition of the song whilst in character.

Even nearly a year after its release, Billie Eilish’s “bad guy” is still spawning parodies from even the strangest of places.

In a recent viral tweet, user @haizakii shared a clip of Dan Povenmire, the voice actor behind Phineas and Ferb villain Dr. Heinz Doofenshmirtz, singing a version of “bad guy” from the point of view of his character.

For those souls out there who didn’t watch the popular Disney show that ran for nearly a decade, it followed the adventures of two step-brothers and their platypus, the latter of whom worked as a spy and constantly tried to defeat his nemesis, Dr. Doofenshmirtz.

“Lab coat, now red, my bloody nose/When you visit we come to blows/But first I get caught up in prose/I’m too vociferous,” Povenmire sings as the literal bad guy. “I cry myself to sleep at night/Tragic backstory’s full of spite/And every day I get in a fight/With a teal platypus.”

It actually isn’t the first time Povenmire, who also co-created Phineas and Ferb alongside Jeff “Swampy” Marsh, has shared his vision of “bad guy” as sung by the iconic show’s evil genius.

He posted his audio-only recording of the parody back in October, but it didn’t seem to gain anywhere near the same traction as last week’s tweet featuring a live rendition, which has almost 60,000 retweets and more than 150,000 likes as of the publishing of this article.

“We stan Dan Povenmire, give him a Grammy!” Phineas and Ferb fan account @PhFMemes tweeted in response to the video.

We stan Dan Povenmire, give him a Grammy! https://t.co/GCg0U2Sl3n

this is the best moment of my life https://t.co/rkVOid893l

Maybe this is the Good Place

And some folks were particularly glad Povenmire went to the trouble of changing the lyrics, rather than just having Dr. Doofenshmirtz sing along to Eilish’s original version.

“I wasn’t sure if I was ready to hear Doofenshmirtz sing ‘might seduce your dad type’ about himself,” Twitter user @Ochirinu admitted.

i didnt even consider that before clickin
so glad theyre edited

According to Povenmire, the viral live performance took place at the Disney Channel‘s Holiday Party at the end of 2019, in what appears to be a karaoke setup. You can watch the full video below, while you wait for whatever the next inevitable parody of “bad guy” will be. Though one about fighting a teal platypus may be hard to top.

So at the Disney Channel Holiday Party, I sang the Doofenshmirtz Bad Guy Cover (by @billieeilish with lyrics by Dr Doofenshmirtz) LIVE! Enjoy. https://t.co/u2IF3PBCDP