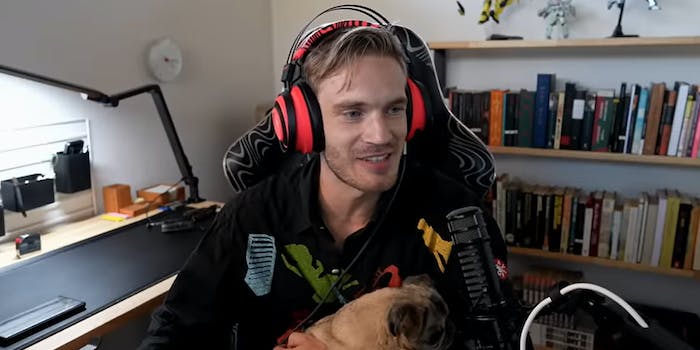 In the video, he mimicked a TikToker who was signing a story.

The video, titled “My Dog Cringes at TikToks,” features PewDiePie and his pug Maya sitting down to watch several TikToks before PewDiePie responds to what they’ve just seen. Sometimes, he’s amused or in shock about the videos. In other instances, he puts on a voice to imitate an accent (such as with a video recording interactions at a cash register where most of the people speak with a Southern accent) or tries to do the challenge a man reportedly cannot do (stepping over a broom behind him).

One of the featured videos was posted by Scarlet May, a TikToker with more than 6 million followers who relays an interaction she had at a drive-thru in which a woman trying to take her order gets way too close to the window. Throughout the video, May speaks and signs her story as captions also appear.

As PewDiePie watches May’s TikTok, the camera moves in as he makes a face.

“No, not listening to this. She has your crazy nails, Maya,” he said, looking down at the dog in his lap and referring to the length of May’s nails, which often clicked together as she signed.

The camera zooms in on Maya as he puts on a voice and moves her front legs around and makes Maya speak as May.

“So anyway, what I did was, I went outside, and then I peed, and then I pooped a little bit as well, and it was crazy,” he continued. “Sorry, are my nails distracting you guys?”

PewDiePie, who has one of YouTube’s most-subscribed channels, has long been called out for offensive rhetoric, which has included antisemitic and racist comments.

But others argued that PewDiePie wasn’t mocking May because of her race or because she was deaf: It all had to do with her nails.

May addressed PewDiePie’s inclusion of her TikTok in his video, which was also used as his thumbnail, after people started asking her about it.

“I feel like it was very weird and very unnecessary, but at the same time I wasn’t surprised,” she said. “I’m used to it. It’s been a big issue in the deaf community. I’ve been trying to normalize and put it out that using nails while signing, it’s normal; like it’s OK. But then, a big creator comes on here and puts us like 1 million steps back, so it’s very frustrating.”

She offered up the possibility that PewDiePie didn’t know she was deaf and had been signing in the video, so his attempt to make fun of her was aimed at one thing (her nails) but unintentionally mocking her use of sign language. But she walked through the scenario and PewDiePie’s first reaction when the backlash against him began, she doesn’t believe that’s the case.

@scarlet_may.1 Replying to @anethepeach we all make mistakes hopefully he learns from this 😊🤟🏽 #fyp #foryou ♬ original sound – Scarlet May 🦋

​According to May, PewDiePie initially put sound over the section of the video featuring May so you couldn’t tell what he was saying, which she feels made it worse—and apparent that he knew he was mocking a deaf person. And even with his view that her video was cringey, he still chose to feature it as the video’s thumbnail.

“You really could have just addressed it and said, ‘my bad I didn’t know she was signing, I just didn’t like the nails’ and we really would have been fine,” she continued. “But no, you decided to go back, edit it out, and sweep it under the rug like nothing happened. “Baby, it don’t work like that over here. If you made a mistake, admit the mistake. You don’t just get to mock deaf people who’ve already been struggling for years with people like you, and then go about your day like nothing happened.”

Eventually, ​​PewDiePie removed May’s video (and his reaction to it) entirely. The video doesn’t address the incident, but he added a clarification about the clip he took down.

“Hey, just to clear a few things up: I edited out the clip with the girl that has the long nails,” he wrote in a pinned comment. “Had no clue she was deaf, but kinda dumb of me to not realize.. Still watching through the clip I only poked fun of her long nails. The voice I did for my dog is the same voice I’ve given her for years. (edit: ..and making my dog’s paws move was poking at people always dancing or doing some move on tiktok, which is an ongoing theme in the whole video). Anyway honest mistake, my bad ✌”

In response to learning that PewDiePie removed her from his video, she updated her followers on the situation and commented on her video with, “haha good way to own up to things.”

We’ve reached out to May’s management for additional comment.