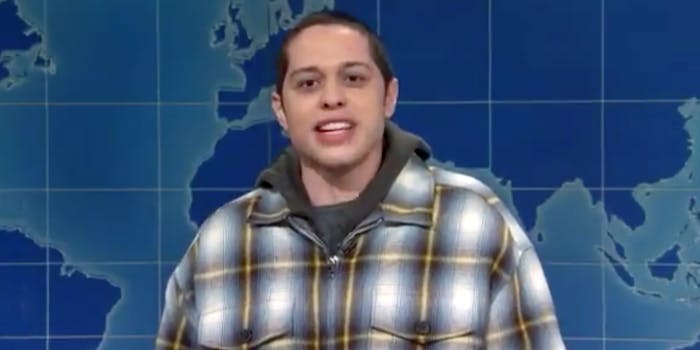 Pete Davidson, who has 6 ‘Harry Potter’-themed tattoos, calls out J.K. Rowling for transphobia on ‘SNL’

Davidson said he 'didn’t know that J.K. Rowling was going to go all Mel Gibson' when he got the ink.

On Saturday Night Live’s “Weekend Update,” comedian Pete Davidson responded to J.K. Rowling’s transphobia and said he was “very disappointed” in her comments.

“I long for a few young years ago when the worst things she did were those Fantastic Beasts movies. No discrimination there, they harmed us all equally,” he told fellow cast member Colin Jost.

Earlier in 2020, Rowling penned an essay explaining her beliefs on transgender rights. In her post, she wrote that certain demands by transgender advocates were dangerous to women. She was widely criticized by LGBTQ+ advocates, who called her out for transphobia. She has since doubled—and even tripled—down on her comments.

Davidson noted he has six Harry Potter-inspired tattoos. He added, however, that he “didn’t know that J.K. Rowling was going to go all Mel Gibson” when he got the ink, a reference to a famous actor who was previously in the hot seat for racism.

“I have a Game of Thrones tattoo and now I’m terrified George R.R. Martin is going to be like, ‘Hey, if you enjoyed what I had to say about dragons and dire wolves, wait until you hear what I think about Puerto Ricans!’” Davidson continued. “It’s crazy times we live in! It’s not fair.”

The 26-year-old comedian went on.

“She creates a seven-book fantasy series about all types of mythical creatures living in harmony with wizards and elves and the one thing she can’t wrap her head around is Laverne Cox?”  he joked. “She’s a national treasure.”