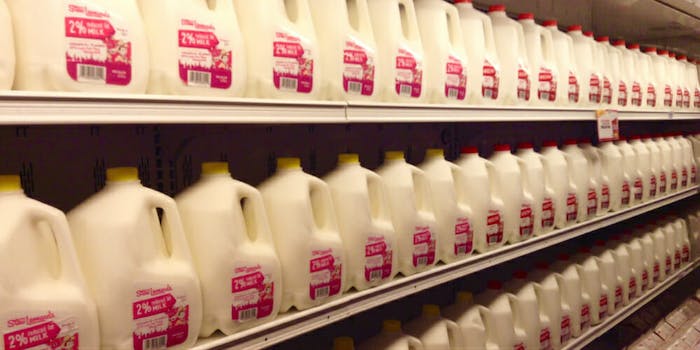 Trolls take on PETA over image of cow breastfeeding a human

People for the Ethical Treatment of Animals, aka PETA, is no stranger to controversial marketing tactics. In its latest problematic ploy, PETA posted an image bordering on bestiality. It depicts a human, adult man breastfeeding from a cow, and it prompted some master trolling from Twitter users.

“Looks weird right? It’s what you’re doing if you drink cow’s milk,” PETA tweeted with the image on Thursday. “Raise your hand if you know that humans shouldn’t be drinking cow’s breast milk. It was made for their babies—not you!”

The image was intended to convince people to stop drinking milk from cows, but it seems to be having the reverse effect on many.

Many other responses similarly sexualized the image.

I'm starting to realize that I'm actually kind of turned on by this picture.

you got any more of these pictures or…

“Use me as a like button if you love milk,” Twitter user @JahovasWitniss said along with a pro-milk video that has so far racked up over 5,000 likes.

The artwork was created by the Bison Movement, which is “the world’s first vegan art collective,” according to the group’s YouTube channel.

The Art or Not Art Twitter account is the unofficial art critic of Twitter that decides what tweets are art or not simply by typing “art” or “not art.” The critic declared the breastfeeding cow image is, in fact, “not art.”

In an email to the Daily Dot, a PETA spokesperson provided a statement from PETA Vice President Joel Bartlett.

“When we saw this artist’s depiction of a grown man suckling from a cow, we knew that we had to share it because it’s disturbing, just like the dairy industry, and it’s certainly got people paying attention,” Bartlett said.