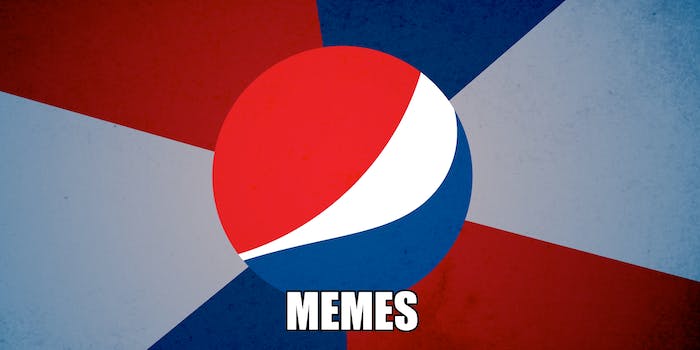 All to get more people to drink Pepsi Max Lime.

In this brave new world of memes, every company is trying to connect to the youth and plugged-in generation with what’s popping on the internet. Typically, they’re weeks late to the trend or just amazingly miss the mark. But every now and then, there’s a brand that *gets it.*

This past week, the company behind the iconic sweet, bubbly drink went a creative route to market its Pepsi Max with lime flavor, posting to its Australian Pepsi page a meme macro of a man facing difficulty holding all his beverages.

Those who only recently became interested in memes may not be familiar with this particular one, which had its heyday in 2010 and 2011. Limes Guy originally came from a Walmart display ad for the George clothing line that depicted a man struggling to keep a bunch of limes in his hands.

The peculiar image caught the attention of the internet, which created a flurry of remixes that all portray somebody failing to keep whatever they’re trying to hold in their hands. A template of the original image is available on Know Your Meme for your own memeing pleasure.

Pepsi clearly chose Limes Guy because of the Pepsi Max flavor. But one Facebook user wasn’t too pleased about the corporation using a meme from half-decade ago.

He decided to call out the company.

You hear that Pepsi, “SIX YEARS.” The caps really communicates that this guy was super mad about this. But within the hour, Pepsi had the perfect fizzy clapback that garnered more likes than the complaint.

For being a well-chilled drink, Pepsi sure knows how to roast ’em. Ironic memeing is the perfect defense for posting Limes Guy unable to hold all his Pepsi Max Limes. In this current climate oversaturated by memes, ironic memes have also seen an uptick. They’re usually employed satirically, when they’re so obviously old or dead that it’s funny to come off like you’re genuinely using them again.

Pepsi’s retort garnered the love of the masses, who began flooding the social media manager with praise. The person behind the account responded to the love perfectly.