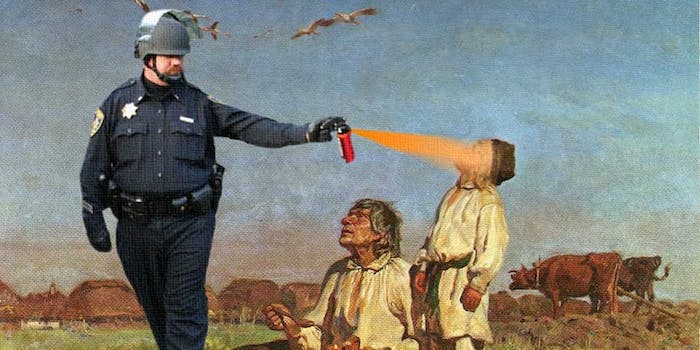 John Pike, who doused UC Davis protestors with pepper spray in 2011, became the center of a furious online vigilante campaign.

John Pike, the former  police lieutenant who became Internet infamous after casually dousing peaceful protesters with pepper spray at the University of California-Davis in 2011, says he suffered serious psychiatric injury from the whole affair. He thinks the state of California should pay him worker’s compensation until he hits retirement age.

To anyone on the Internet in 2011, Pike is better known as the Pepper Spray Cop. Video and images showing his moment of callous violence against Occupy UC Davis protesters on Nov. 18 immediately went viral. Pike became the subject of a thousand angry image memes. Hackers posted his personal info online, and in no time his email was getting flooded with furious messages, some threatening violence against his family.

Pike, who was making  $121,680 per year at the time, was put on paid leave for eight months while the university conducted an investigation into his actions. That group ultimately found that his actions were “reasonable under the circumstances,” noting “Pike warned the protesters before taking action and that he spoke against the decision to remove the encampment,” according to the Davis Enterprise. The UC Davis police chief fired him anyway—though not without a full pension.

In an ideal democracy, violent suppressors of political speech are jailed and not rewarded. This sends a message that acts of violent political repression can be both insulated from real criminal prosecution and rewarded.

If Pike’s request goes through, it seems the only one who will really pay for this whole mess is the University of California itself. Last year, the university settled with Pike’s victims to the tune of $1 million.