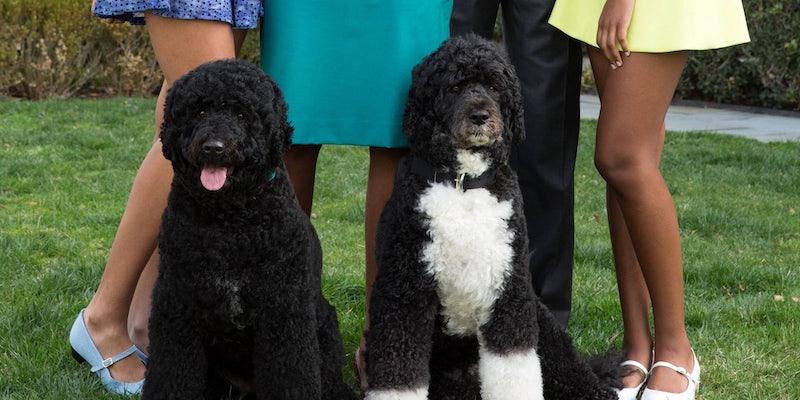 A farewell to paws.

Twitter users are sick as dogs just thinking about the deep loss Americans will face come next Friday. Nope, it’s not President Barack Obama, nor the first lady—it’s the FDOTUS, the first dogs, that everyone is weeping over.

Bo and Sunny, the first family’s Portuguese Water Dogs, are just as iconic as the Obamas themselves. Having joined the family in 2009, Bo, distinguished by his white markings, enjoyed a first term alone before being joined by Sunny in 2013.

The pair fit in perfectly at the White House during both casual and formal events, their prim black curls and Bo’s natural tuxedo shirt allowing the duo to dress up with ease. And now that they’re off to roam greener pastures (metaphorically, that is, because how could any gig be cushier than being a White House dog?), Americans are having trouble mustering the emotional strength to say goodbye.

This is Bo. He was a very good First Doggo. 14/10 would be an absolute honor to pet pic.twitter.com/AdPKrI8BZ1

This is Sunny. She was also a very good First Doggo. 14/10 would also be an absolute honor to pet pic.twitter.com/YOC1fHFCSb

I'm even gonna miss Obama's dogs. What's the White House gonna be without Sunny and Bo? Can they be president? I trust them.

bruh Obama family can even get their dogs to pose for pictures name literally anything more iconic pic.twitter.com/gpmEou0hAD

According to the Washington Post, though Trump is currently pet-less, a prominent philanthropist in possession of Patton who has known Trump for more than two decades believes Trump will adopt the pup. Peep video of Patton below (the clip has no sound.)

In the Dec. 6 report, spokeswoman Hope Hicks said Trump hadn’t yet made a decision on the young pup, though the philanthropist, Lois Pope, felt otherwise.

“I’m sure. Every president has a first dog,” Pope said at the time. “It goes with the presidency.”