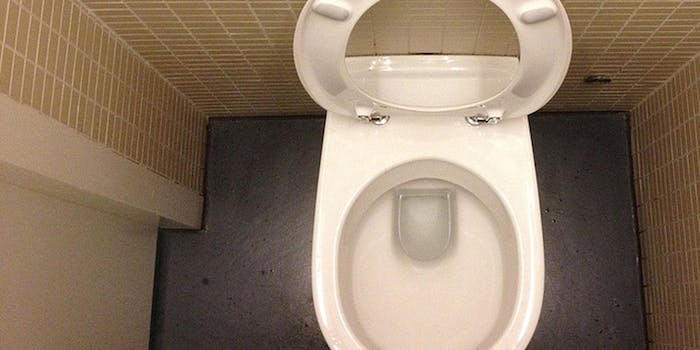 We all had a good laugh at the Australian teen who dropped his new iPhone on live TV, but that’s nothing compared to the ignominy of having lost it to the commode. Such an accident confirms the dirty truth we try not to think about: that everyone surfs the Web while shitting.

Damn! My iphone 6 just flushed in the toilet bowl :?

omg my friend dropped her brand new iphone 6 in the toilet…..

Idk which is worst, the guy who dropped his iPhone 6 or me dropping phone in the toilet while it’s flushing.

First day I get the iPhone 6 I drop it in the toilet. 😐

Summary of my wife’s first day with her iPhone 6: my daughter hasn’t put it in the toilet yet. Will update again tomorrow.

iPhone 6 more slippery than iPhone 5. Beware when texting or tweeting on the toilet seat.

bravery is using this iPhone 6 on the toilet #noinsurance

Other people seem to be dropping old phones in the toilet on purpose, just so they’ll have an excuse to shell out a few hundred bucks for a newer model.

got drunk and dropped my phone in a toilet, iPhone 6 here I come😊

Dropped my iPhone 5s in the toilet last night before the iPhone 6 went on sale. What a coincidence. 😜 pic.twitter.com/RCIbJrX8Ik

My sister dropped her phone in the toilet and now she is getting the iPhone 6 the day it comes out:’)

ok i rly want the iphone 6 now . i’m debating whether to throw my phone against a wall or flush it down the toilet

Of course, there’s more than one way to break your fabulous status symbol.

These poor souls, anyone else already crack their iPhone 6 screen? pic.twitter.com/YbzOMzjIR5

@ericaalynn19 would crack her iPhone 6 the day she got it pic.twitter.com/qMPEofl8Ly

My face when David broke his iPhone 6 pic.twitter.com/PiFfLjxuUd

At the party I went to a girl had a new iPhone 6 in her pocket and somebody pushed her into the pool, the phone hit the bottom and broke👀

Oh, well—it’s about time to line up for the iPhone 7 anyway.