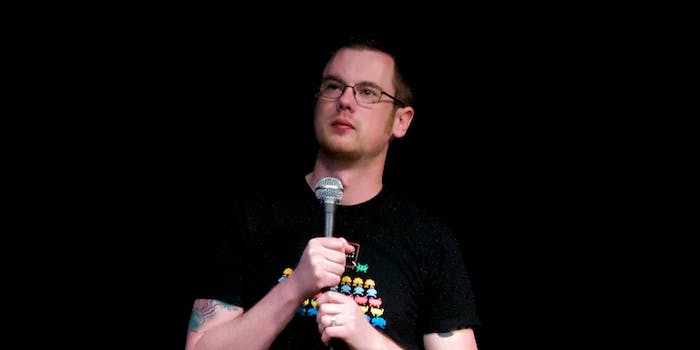 He’s kicking 2014 off by making sure you know that he feels really, really sorry... for himself.

It’s official—maybe: PAX, one of the gaming industry’s largest convention franchises, and its parent, powerhouse webcomic Penny Arcade, are taking some time apart. Or are they?

And PA co-creator Mike Krahulik is really upset about it.

It’s tough to tell, but one thing’s sure: he’s kicking 2014 off by making sure you know that he feels really, really sorry… for himself.

After a year which saw businesses canceling their PAX sponsorships and Krahulik himself roundly criticized for being the source of Penny Arcade’s ongoing problems with encouraging diversity, Krahulik took to Penny Arcade’s blog for a post about attempting to distance PAX from the problems of its two creators and specifically himself.

“You’ll notice that it is no longer the Penny Arcade Expo,” Krahulik wrote. He’s apparently referring to the removal of the words “Penny Arcade” from the PAX website, though the connection is still clear, and he and Penny Arcade co-creator Jerry Holkins still run it.

It’s outgrown us and it belongs to the gaming community at large now not just PA fans. Someday I expect to attend a PAX and not even be recognized. That’s honestly fine with me. I don’t want the material on PA or who I am to keep people from attending and enjoying PAX. During the Q&A at PAX Prime we actually talked about slowly removing ourselves from the show over the next few years. We’ve been doing it for a decade now and I’m happy to step out of the way and let the show grow without me rather than inspite of me.

Krahulik doesn’t stop there, however: he insists that he needs to make changes within himself in order to “stop being a jerk”—apparently his New Year’s resolution. He doesn’t actually go as far as to apologize for his previous behavior, but he at least seems to recognize that there’s a problem.

It’s unlikely that Krahulik’s previous painfully sincere attempts at self-examination have left anyone in doubt that he’s well-meaning and doesn’t actually intend to foster an exclusive community. But however well-intentioned, the post comes across as typical Krahulik—instead of acknowledging the systemic problem of -isms and -phobia in gaming culture, he addresses them only obliquely and instead focuses on his personal experiences as a bullied kid who became a bully himself. And while it ostensibly asks us to pity him, it also sets himself apart as a kind of glorified underdog who secretly always has one up on his opponents:

Kids would come at me with some bullshit about my teeth or how goofy I looked and I would retaliate with insults I had custom built for them while lying awake at night and each one was a precision strike to their insecurities… I’m 36 years old now though and I realize what I am is a bully. I may have been the one who got beat up but I sent plenty of kids home in tears.

If Krahulik seems defensive, it may be because 2013 was a rough year for Penny Arcade, and Krahulik in particular. In June, an approved panel at Penny Arcade Expo (PAX) Australia titled “Why So Serious?” offended basically everyone by implying the gaming community was getting bogged down in trivial conversations about racism, feminism, etc, instead of having fun. After instant online backlash, Krahulik responded with a series of angry, transphobic tweets and defensiveness that drew widespread attention. He later apologized, but followed up his summer tour de force with a series of PR fiascos, including accidentally reigniting the infamous Penny Arcade 2010 “Dickwolves” controversy, then issuing a defensive apology for it.

Then Penny Arcade posted a “brutally honest” job posting that drew widespread ridicule for appearing to thumb its nose at the idea of a fair and progressive working environment. To top it all off, in December, an internal PAX memo leaked revealing the convention’s plan to host a “Diversity Lounge,” an idea that struck many in the gaming community as a regressive case of missing the point.

The various missteps triggered ongoing backlash, from Wired’s Rachel Ededin declaring “I’m never going back to PAX” to an article on Salon Wednesday opining that the gaming community PAX and Penny Arcade once used to foster now no longer feels inclusive. In the middle of it all was Krahulik, accused throughout the year of being overly defensive and the source of most of Penny Arcade and PAX’s increasingly bad press.

To its credit, Penny Arcade seems to have internalized the community’s response. (Numerous businesses vowing never to go to PAX as a result have probably helped drive the point home.) As clumsy as the “Diversity Lounge” is, it seems to have been intended to give diverse PAX attendees and organizations ways to have a booth on the con floor without paying the high booth fees of the regular convention area. In the “Resolutions” post, Krahulik addresses it for the first time, noting that while he understands why people are apprehensive, he believes in the motive behind it:

I’ve seen some articles about the roll for diversity stuff happening at PAX and I respect that some people are hesitant to jump on board or see it as a stunt of some kind. I can tell you in all honesty that it springs from a desire on our part to do better and be better. Is there more we can do? Well to be fair we haven’t even done this yet. I’m sure it will need tuning and adjusting but every tweak and change will be done with the goal of making PAX a better show for everyone.

It shouldn’t need saying that distancing PAX from Penny Arcade may only be cauterizing a deeper wound. For many people like me, Penny Arcade as a comic was our first real introduction to the world of gaming, and the first vehicle through which we realized that the gaming community had something to offer even fringe gaming enthusiasts like us. If Krahulik sees a separation as a way to make PAX more inclusive, it still leaves the question of what Penny Arcade will be if its creators don’t actually feel an obligation to be respectful towards their larger PAX community. We’re certain no one, especially not Krahulik, wants a repeat of the Dickwolves incident. But separation, historically, has never led to enlightenment.

Still, it seems that Krahulik in 2014 intends to do his best to prove the skeptics wrong.

If his track record—and his blog post—is any indication, it’s probably too much to hope that he’ll do it with a minimum of drama.