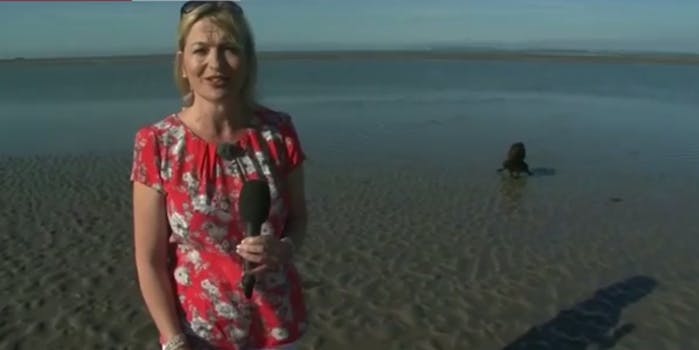 Someone get this dog a horse mask.

Carol Kirkwood, a weather reporter with BBC’s Breakfast Show in England, was giving her forecast live from the coastal community of West Wittering in Sussex. Suddenly, her brown lab, “Connie” wandered into the background and used its 15 nanoseconds of fame as any dog would: to relieve itself right there on the beach.

Kirkwood didn’t notice Connie’s sudden call of nature at first, but her co-anchors Charlie Stayt and Louise Minchin certainly did, and were unable to hold back laughs.

Later on, BBC’s Breakfast Show tweeted about the incident.

Soooo… that was awkward. Rest assured: our sources tell us it was a number one. #bbcbreakfast pic.twitter.com/0eUsyfM3f6

If the dog wishes to become a professional photobomber in the background of TV news broadcasts, perhaps it should consider investing in a horse mask.