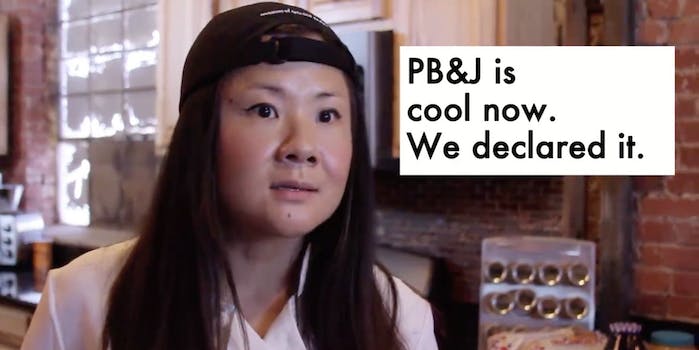 ‘Bon Appétit’ gets roasted for super-white guide to eating pho

We all know how to eat and enjoy a peanut butter and jelly sandwich, right?

There’s a right way to eat all foods and digital food magazine Bad Appetite is here to show us the light.

Created by writer and comic Jenny Yang, the video was inspired by a recent Bon Appétit video titled “Pho Is the New Ramen,” which was accompanied by the headline “PSA: How to Eat Pho.”

Yang’s video is a brilliant sendup of the original video, which Bon Appétit has since removed. But you can still view the original for comparison on Facebook.

It features a white chef and restaurant owner urging viewers never to season the broth without tasting first, because that “hurts the chef.” The owner of Stock, a Philadelphia-based restaurant, also demonstrates a special “twirling technique” he learned from his wife and speaks in generally condescending tones throughout the video.

Not surprisingly, Asian and Asian-American viewers were horrified by the video. The clip came to Yang’s attention when friends tweeted at her asking, “Hey, is this Columbus-ing?”

Yang told the Daily Dot, “I was like yeah, of course it is. Then other people tagged me and I was like OK, let me take a closer look.” Yang reviewed the video and realized why it was so upsetting: “The more I looked at it the more I saw what was so annoying about it. It struck a chord.”

Yang explained, “Food… is a point of pride and a representation of our identity. In our media, Asians are not really represented, so for someone who is white to talk about the food we identify so closely with and oftentimes in our childhood were made fun of for eating, that’s very painful.”

As many Facebook commenters have pointed out, if Bon Appetit wanted to showcase Vietnamese cuisine, they could have easily found a Vietnamese-owned restaurant. And while the featured chef insists it was never his intention to position himself as an authority, his messaging certainly comes across as condescending.

“Where is this twirling technique coming from?” asked Yang. “No one’s ever heard of it. And why is he referencing his wife?” Yang Googled her, and yes, she’s Asian. “It just triggers all these memories of people trying to say they’ve got ‘cred’ by saying ‘oh I have Asian friends or an Asian girlfriend.’”

Yang added, “When you say you’re going to ‘elevate’ our food, that hurts our grandmas.”

It really is too bad because, as Yang, who has taught dumpling-making workshops, points out, food is a wonderful thing to share.

“Food is so beautiful, right? It’s so elemental. I love that we have more of a food culture in America now because of Yelp and sharing cultures. What we need to get right moving forward is that food is not just sensory. It’s also culture and identity and it’s political… That’s what’s tough to navigate.”