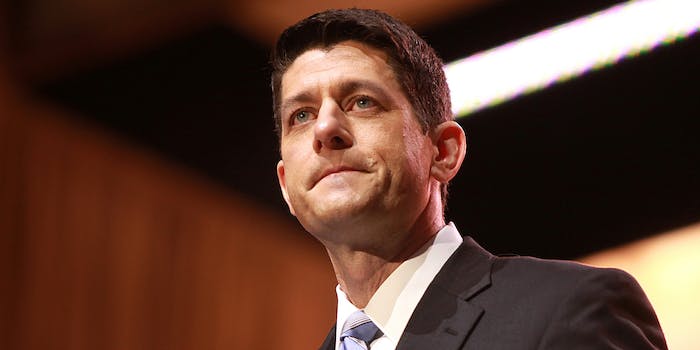 Is it really happening?

This year churned out a seemingly endless stream of depressing news in America. But now that we’re almost in 2018, we’re seeing some news that isn’t completely terrible. Earlier this week, Democrat Doug Jones won an Alabama Senate seat, defeating Republican Roy Moore, a man accused of assaulting several teenage girls. And now a new report from Politico says that House Speaker Paul Ryan will retire after next year’s midterm election. The article said that Ryan has apparently told his friends that “he feels like he’s running a daycare center.”

He would like to serve through Election Day 2018 and retire ahead of the next Congress. This would give Ryan a final legislative year to chase his second white whale, entitlement reform, while using his unrivaled fundraising prowess to help protect the House majority—all with the benefit of averting an ugly internecine power struggle during election season. Ryan has never loved the job; he oozes aggravation when discussing intraparty debates over “micro-tactics,” and friends say he feels like he’s running a daycare center.

Many people are all too happy to see Ryan leave. Twitter was filled with lots of goodbye notes.

Bye and please take Donald Trump with you! https://t.co/Quf421jt6o

Ryan has been seen as an enabler of Trump and his policies.

The biggest rat is fleeing the ship. https://t.co/ixOfkpoXia

I just read the Politico piece on Paul Ryan. This stands out among many bits. We can’t see it now, but history will be ruthlessly unforgiving of Ryan. As the horror of Trump comes into full view, his enablers will have their legacies destroyed. Enjoy your temporary tax cuts. pic.twitter.com/51bOLwA5Kq

The news was a good excuse to use the “retire bitch” meme.

[carves “paul ryan retire bitch” into the surface of the moon with nuclear lasers] https://t.co/5IVl0PS3Yl

*climbs to the highest mountain with the biggest bullhorn*
PAUL RYAN RETIRE BITCHhttps://t.co/vWL85s4e5h

Chalk one up for “retire bitch” https://t.co/ABfdZ76Ydz

Trump reportedly called Ryan after the Politico story to ask if the news was true.

Trump called Paul Ryan after Politico story broke and asked him if he was leaving. Ryan told Trump he wasn't "going anywhere," per aide.

Ryan apparently told Trump that the news wasn’t true, according to the White House.

Sarah Sanders on Trump's reaction to reports that Paul Ryan may resign next year: Trump told Ryan if the news was true "he was very unhappy about it" pic.twitter.com/rLrFCRnUPn

Of course, Ryan probably wouldn’t tell Trump if he was actually planning to retire. We’ll just have to wait until next year to see if (or when) he decides to sneak out.